Will It Turn Out Peachy for the Series Favorites?

It’s round one of the Plum Peachy stake series for ICF 3-year-old pacing fillies Friday night. With 21 of the gals passing the Hawthorne entry box, the first leg was split into two divisions.

They’ll be 10-across in the sixth race first division, where the 2016 Illinois Harness Horse of the Year Princess Sage makes her season debut with Freddie Patton Jr. at her lines.

Speed is last year’s ICF freshman champ’s game and Princess Sage will very likely be winging out from the five-slot tonight and have to be caught. Princess Sage hasn’t gone postward since her Violet championship last September 25th but it appears Freddie didn’t want to waste any of her bullets and start his talented filly before the Plum Peachy.

As it turned out Princess Sage showed plenty prepping for this outing. She pulled away to a 1:57.4 clocking in her first qualifier on May 16 at Springfield beating the likes of ICF 3-year-olds Gabe Henry and Dee Tumbleweed and nine days later she came to Hawthorne and was seven widening lengths the best, this time in 1:55.3 for her Clinton, Mississippi driver and trainer. 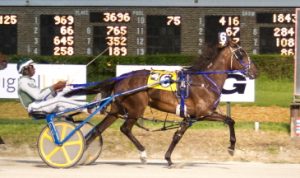 Princess Sage ended her freshman campaign with 8 wins in 11 tries including victories her last three—the Incredible Tillie Final on the Night of Champions, her Violet elimination and the Violet Final. She banked over $90,000 for Freddie and co-owner Keli Jo Bell of Windsor, Illinois.

Just how the second Plum Peachy division will play out is anybody’s guess. The deserving tenth race early favorite is Lady’s Party, fresh off a sweep of the Dave Magee Series where she got her nose in front at the wire of the final despite a wide mile from the 10-hole.

However, things could be even more problematic for the Mike Titus filly tonight because Lady’s Party landed the 11-slot requiring her to start from the second tier. She won’t be able to utilize her good gate speed and sprint out with a wall of horses in front of her, so it’ll be interesting to see how her driver Casey Leonard handles the sticky situation.

Casey may have a lot of bobbing and weaving to do to get Lady’s Party to the front unless he elects to race her from behind and hope the filly can overcome some likely traffic problems.

While Lady’s Party likely starts behind the one-horse Filly Forty she is not compelled to do so. Casey can start her anywhere in the second tier with no other horses to his right.

For instance he could start Lady’s Party behind the No. 2 filly Rousey Ronda who has shown gate speed at times or even in back of the last year’s Violet runner-up (No. 5) Razzleme Dazzleme.

Shehan Finding His Niche at Hawthorne

The second time around driving at Hawthorne is going in the right direction for Kentucky native Tyler Shehan and you can expect his stay in Illinois to be a lot longer than it was a year ago.

Tyler drove at Hawthorne for the first time last summer but left in mid-June after a half-dozen wins or so to resume driving on the Kentucky Circuit where the 34-year-old native of Hopkinsville, KY has been competing since he was 19.

“The primary reason I left last year was a commitment I made to my owners to be back to drive their Kentucky sire horses,” said Shehan. This year I’m staying to the end of Hawthorne. I’ll go back home just to drive in some Kentucky sire stakes.” 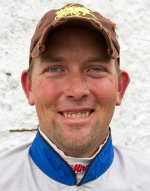 This year Shehan already has 10 driving wins in the first 12 racing programs at Hawthorne and is picking-up more live drives as we start the month of June.

What brought Shehan back to Hawthorne?

“The money is good here,” replied Tyler. It’s much better than it is in Kentucky. The only track going there now is Thunder Ridge and their $2,000 purses just don’t cut it.”

Shehan also added the fact that this summer he has one more mouth to feed.

I introduced myself to Tyler last Saturday near the Hawthorne paddock, after he greeted his wife Marna and their 6-month-old son Logan nearby, when the first race was over.

“I can provide for them better with the purses here than I could with those back home,” said Tyler who then went out and won the $11,000 Open II Pace for fillies and mares with Kyles Secret ($19.60), nicely rating the Chupp Racing Stable mare to her front-stepping 1:53.1 victory as the fifth betting choice in an eight horse field.

The next night (Sunday) Shehan made two more stops at the Hawthorne winner’s circle, first with Morningstar Sam for trainer Mark P’Pool and later with the 42-1 longshot trotter Drink At Last Call ($87.60) from the Kennedy Lindsey Stable. 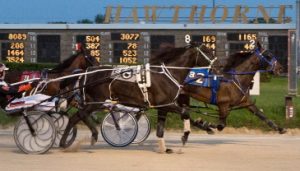 Shehan drove the Chupp Racing Stable’s Kyles Secret (inside No. 2) to an upset victory in last week’s Open Pace for fillies and mares. (Four Footed Photo)

While most of the Kentucky tracks are smaller ovals than Hawthorne Tyler does have big track driving experience competing every year at The Red Mile in Lexington. However he’s quick to point out there’s a big difference in the length of the stretch between the two mile tracks.

“Hawthorne is a lot longer,” said Shehan. It’s not even close (1,320 feet compared to 850 feet). At The Red Mile you can do well driving on the front-end. At Hawthorne not so much unless you have the wind at your back in the stretch or are able to get away with a soft quarter like I did the other night in the Open Mare Pace.  Hawthorne has tougher horses than back home and this year they are tougher from the bottom up than from last year. I’m sure the better money this summer created that.”

Shehan went on to compare of the racing on the Chicago circuit and in the Bluegrass State.

“There aren’t as many horses here gapping out as they do in Kentucky where the fields aren’t as deep in ability as they are at Hawthorne. The horsemen here classify their horses very well.  Hawthorne’s fields are often bunched-up and most of the time you aren’t really too far back. It seems that all the horses here fit their races better than back home where are a lot of times there are horses that just aren’t competitive as they should be and there is a lot of gapping in a race.  Most of the time at Hawthorne you’re never really out of a race because of the length of their stretch. I really enjoy driving here.”  And it’s showing for Shehan.

It All Starts Friday: The road to Hawthorne’s Night of Champions begins this weekend for ICF 3-year-old horses of both gaits.

Round one of the four legs it takes to accumulate enough points to make their respective stake finals starts Friday with two opening leg divisions of the Plum Peach for state-bred sophomore fillies. On Saturday it’s the initial legs of the Robert F. Carey Memorial series for ICF pacing colts and geldings.

The 3-year-old Illinois bred trotters get their chance to be in the limelight on Sunday evening when the Erwin F. Dygert for males and the Beulah Dygert for the gals vie in first round action of their corresponding stake series.

The final scheduled day of the General Assembly came and went with accomplishing very little. However, they didn’t adjourn for the summer and will reconvene later in June. SB7, our gaming bill, as expected was never called in the House. We passed it out of the Senate a few weeks ago. Without a budget in place, we are told the bill will simply have to wait. We had a small VGT bill pass out of the gaming subcommittee but it never advanced from there. Our money for the State and County Fairs also sits in limbo, awaiting the final budget. The one encouraging development from this session so far is an internet gaming bill that seemingly came out of nowhere. Originally, we were not included, but through tenacious work by the lobbying teams of all three horsemen’s groups we were able to get into the bill and garner a fair deal. The bill allows fantasy sports and allows casinos to get an online gaming license. The bill in its current form would also allow racetracks and ADW companies to get an online gaming license. Before obtaining a license though, both racetracks and ADW’s would have to contract with horsemen for a percentage of the revenue, a plan for eliminating recapture and a guarantee of live racing dates. This bill passed the Senate 42-10. It now has to be passed in the House and then would need a signature by the Governor. If this bill ever becomes law, the potential revenue for purses is very, very  promising . We will keep everyone abreast of the facts and the issues as they progress.