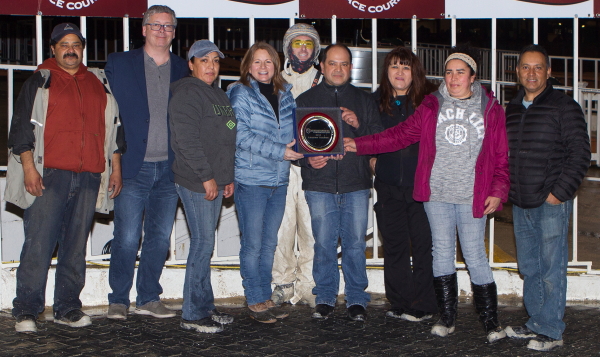 The curtain comes down on the 2018 winter meet at Hawthorne. After Monday’s ninth and final race of the night is over the Chicago harness racing circuit will lie dormant for the next 11 weeks until the summer meeting gets under way on Friday, May 4. 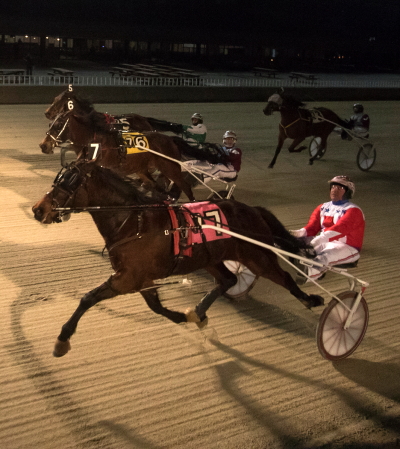 Casey Leonard completed a driving triple Sunday night when he guided Bluebird Cantab to his win in the seventh race. The 3-year-old trotter is trained by his father Terry. (Four Footed Photo)

The outcome of the Hawthorne’s driver’s race has not been officially determined. Nevertheless it appears Casey Leonard has successfully defended his title after a driving triple on Sunday’s card.

The trainer’s race for the winter meet has been a hard fought battle all meeting long. Loralee Johnson moved into the top spot with 18 last night when she sent out two winning horses. Tom Simmons is one behind with 17. Right there are trainers Terry Leonard with 16 and Payton Ode 15. 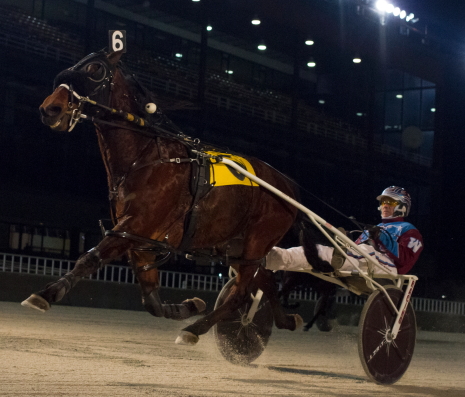 The fifth race filly and mare pace saw Sammy steer On The Cusp ($7.20) to a game front-stepping triumph. The 11-year-old veteran mare had to work hard for her 30th career victory. She was parked out to the 28.2 first quarter to make the front, gave it up to Bucklegirl Bobette, and then came out and regained it at the 57.1 first half.

Once there for the second time On the Cusp put away all challengers, pulling away by almost three lengths in the 1:54.1 mile for trainer Payton Ode and his Indiana owner John Langacher. The 33-1 longshot Morgangetsherway (Juan Franco) edged out Bucklegirl Bobette (Mike Oosting) for second.

The Tom Simmons Stable’s Aimo Hanover ($2.60) left no doubt he was the best in the sixth race Open III for male pacers. The six-year-old gelding was hustled out of the outside six-slot by Widger who had the gas pedal down throughout the 1:51.3 mile, the fastest of the Hawthorne winter meet.

Aimo Hanover paced the first quarter in 27.4 and then rattled off three consecutive 28 flat panels to nail down his second triumph in a row for Clinard Properties of Mount Sterling, Illinois.

Gibbs (Brandon) Bates rallied for second while Fox Valley Reggie had a solid effort to be third. 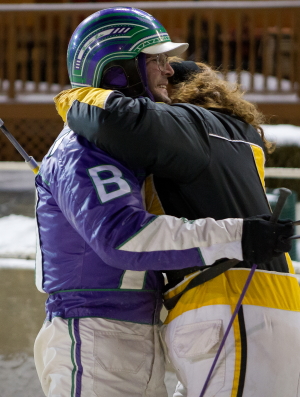 Sagebrush Shocker and Fox Valley Skywalk came through with victories last night in their respective $25,000 Late Closer Finals for 3-year-old ICF pacers but there were some nervous moments for their supporters in both races.

Driver Brandon Bates gave Sagebrush Shocker ($4.80) what turned out to be a winning pocket trip but for most of the stretch drive it appeared the Kim Roth trained gelding wouldn’t find racing room behind the pace-setting Frontier Frank (Mike Oosting).

Sagebrush Shocker did in deep stretch and rallied in time for his 1:56.3 victory.

The 10-1 longshot Adele’s Big Party had a big effort for his new driver Todd Warren and finished strong to be second, beaten three-quarters of a length while Frontier Frank settled for third.

Bates would go on and finish the Saturday card with three consecutive victories, clicking with Dragon Jewel in the eighth and Fox Valley Cupid in the ninth, the latter another Kim Roth trainee.

The $25,000 Doc Walker Final saw the heavy t 1 to 2 favorite Fox Valley Catwalk complete a sweep of the filly series for driver Tim Curtin however for a while her backers were ready to tear up their tickets.

Fox Valley Catwalk was about to clear to the lead right before the first quarter pole when she went off stride. The Sportsmaster filly had to be taken back to almost a walk and regained stride some 9 or 10 lengths behind the leader Lilac Laurey.

“Catwalk” then raced without cover the rest of the way, getting even with Lilac Laurey near the three-quarter pole and then pulling away and winning by four and one-half lengths in 1:59 for her fourth in a row.

Fox Valley Catwalk’s season earnings now stand at an even $36,000 after she banked $8,588 in her freshman campaign for Sherman, Illinois owner and trainer Rodney Freese.

Schwarber ($9.20) came charging down the stretch to take the $10,000 Open Trot and give Tim Curtin a driving double on the card. It was the second win in a row for the Curt Grummel trained gelding. Longshot All About Cowboys took second while the even-money favorite Skyway Jaylo held on for third.

Down to Two: There’s just two racing nights left at the Hawthorne winter meet but there are still some appetizing races left before the Chicago harness racing circuit goes dormant until early May.

Tonight’s last Sunday card offers attractive back-to-back Open III pace events, the fifth race for fillies and mares and the sixth for their male counterparts. Both fields were handicapped and drawn by groups.

In the nine-horse distaff co-feature the 1-2-3 finishers of the last Open III paces—Rocking Katie (pp 8, Casey Leonard) and Rockin Praline (pp 9, Tim Curtin) and Mystical Nectar (pp 7, Pat Curtin)—drew for the outside slots and figure to get the bulk of the wagering public’s money. 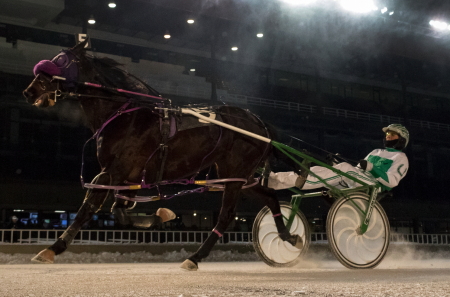 Runner-up Rockin Praline has been first or second in all five outings at Hawthorne for trainer Tom Simmons and earlier has a three race sweep of a Late Closer Series. Mystical Nectar hasn’t missed a check in four tries for trainer Payton Ode however she hasn’t made a visit to the winner’s circle yet.

The Tom Simmons trainee Aimo Hanover (Sam Widger) was allocated the outside six-slot in co-featured sixth race for males after his easy 1:54 victory last weekend. The 6-year-old pacer sped to a 1:49 flat mile last year at Springfield.

The 4-year-old ICF pacer Captain Rhett also bettered 1:50 last summer with a 1:49.3 clocking at Springfield. The Duneside Perch gelding raked in over $145,000 in his sophomore captain with a big hunk of that amount coming from his victory on the Night of Champions in the $180,000 Robert F. Carey Memorial. Mike Oosting will drive for trainer Mike Brown.

The field is rounded out with My Friskie Boy (pp 1, Casey Leonard) and Fox Valley Reggie (pp 2, Pat Curtin).