Homepage
You are here: Home1 / Mike Paradise2 / A New Defending Champ in the Open Pace 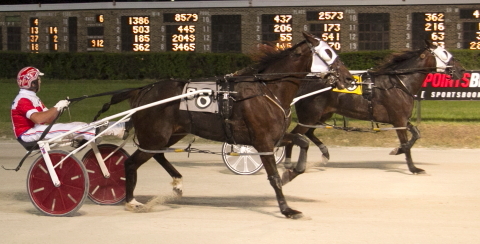 For the first time since the start of the 2020 Hawthorne Standardbred meeting back in February a horse not named Fox Valley Gemini or Castle Flight tonight will defend the role as the kingpin of the aged pacing division.

That honor belongs to Ponda’s Prospect and his driver Ridge Warren. In the last Open Pace at the meet contested two weeks ago, the sometimes overlooked Terry Leonard trained gelding showed his heels to his more renowned stable-mate Fox Valley Gemini with a neck triumph at 15-1 odds.

Ponda’s Prospect July 17th victory wasn’t his first Open win with Ridge Warren in the sulky. Warren won a Hawthorne Open Ponda’s Prospect in the summer of 2018 when Ridge was driving the horse on pretty much on a semi-regular basis.

Ponda’s Prospect usually comes from out of it, and sometimes he’s too far out of it to be success. That wasn’t the case last week when the horse enjoyed a two-hole trip when left from the six-post. 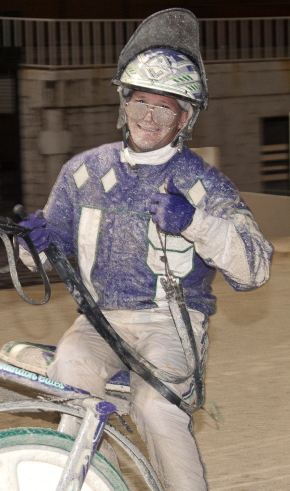 A smiling Brando Bates gave the track photographer a “thumbs up” after notching his 1,000 career driving victory last Sunday with the ICF 3-year-old trotting filly Fox Valley Extacy in a leg of the Beulah Dygert stake series. (Four Footed Fotos)

“The horse always tries hard in the last eighth (of the mile) but he hasn’t been very versatile so sometimes we would have too much ground to try and make up,” said his 31-year-old driver.

“The horse never leaves but I thought last week if I could get ahead of the one and two horses early on we might get to race up close. As it turned out we sat in the pocket throughout and he was still pacing hard in the late going like he always does.

“Ponda’s Prospect is a good horse and I’m thankful I’ve had the opportunity to drive him. He’s sharp now,” added Ridge, who is now also driving at The Meadows in Pennsylvania Mondays, Tuesdays, and Wednesday.

A victory in a Hawthorne Open on the pace or the trot regularly means the winning horse will draw for the outside looking in the next time he or she goes to the gate in the $10,500 uppermost overnight event, and that’s the situation again tonight.

Ponda’s Prospect landed the seven post in the eight horse feature field with “Gemini” getting the eight after being handicapped with the10-hole in his last pair of Hawthorne Open outings.

Shark Play (Kyle Wilfong), Toxic Rock (Cornarius Stewart) and Better Watch Out (Tyler Shehan), three pacers new to the local Open, were drawn into the 1, 2 and 3 posts, in that order. The 4, 5 and 6 went to On Duty (Jim Lackey), When You Dance (Todd Warren) and Jet Airway (Bobby Smolin), respectively.

Milestone for Bates: Congratulations to driver Brandon Bates who recorded his 1,000th career dash winner on Sunday at the lines of the ICF trotting filly Fox Valley Extacy in a third leg of the $15,000 Beulah Dygert trotting series.

The a 44-year-old Bates, known for his patience in a racing bike, rallied the Hector Herrera trained filly past the even-money favorited Lous Abigail, propelling Fox Valley Extacy to the top spot in the current Beulah Dygert point standings.

Bates began this season competing at Hawthorne before the Covid-19 outbreak put a halt to harness racing throughout the country. After the nationwide restart Brandon went to Hoosier Park, competing in Indiana on Tuesdays through Saturdays and coming back to drive at Hawthorne on Sundays.

Brandon has driven more than 100 winners the past four seasons and is a cinch to so again in 2020.