Homepage
You are here: Home1 / Mike Paradise2 / A Constant Star Shines at Springfield

Under a bright and sunny sky and temperatures in the high 80’s a quartet of aged ICF horses earned their way into the Springfield State Fair winner’s circle Saturday afternoon.

For Danny Graham’s gifted five-year-old trotting mare Anna’s Lucky Star it was an expected visit to get her picture taken with her Salem, Illinois owner and his friends and family.

After all, Anna’s Lucky Star has been perfection in her Illinois State Fair Colt Stakes appearances for trainer Nelson Willis.

The home-bred daughter of Cassius out of Danny’s fruitful broodmare Queen Jamie won her Springfield division championship as a two, three and four year-old and this time around she only had two other trotters too beat, which she did Saturday by strolling to an almost eight length victory in a training mile time of 1:59.2.

It was career victory No. 30 for “Anna” and it came in just 52 lifetime starts. That’s a dazzling 57 winning percentage and for the last two seasons the mare has been taking on rugged Open Trot foes at Hawthorne and also at Hoosier Park.

Anna’s Lucky Star ($2.10) now has career earnings of over $310,000 with the upcoming Du Quoin Aged Trot Championship State Fair next up, a stake race she won as a four-year-old and yep, you guessed it, in as a freshman and sophomore trotter as well. 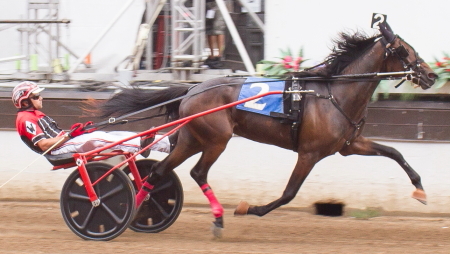 Anna’s Lucky Star (Kyle Wilfong) has now won the ISFCS championship at Springfield as a two, three, four and five-year-old. Saturday’s victory was the already the ICF trotter’s 30th in less than four full seasons of racing. (Four Footed Fotos)

Kyle hustled You’myhearthrob out from the five-post and to a blistering 26.1 first quarter. The son of Some Heart Throb went to the half in 53.3 and the three-quarters in 1:22.1 with He Gone Jack on his back but there was no catching You’remyhearthrob who also captured the 3-year-old Springfield championship. He Gone Jack (Ridge Warren) raced big to be only a neck short at the finish wire.

Your’remyheartthrob, trained by Brett Wilfong, was the third betting choice in the race and gave his supporters a fair $7.00 return on a two dollar wager.

Valiant Effort: The Gerald Hansen trained 4-year-old Talk About Valor (Casey Leonard) made every pole a winning one for owner Shelly Steele of Monee, Illinois in the $7,000 aged male trot championship

Talk About Valor ($4.00) went right to the top from the get-go, took the field to a 28.2 first quarter and to the half in 57.4 with the 4-5 favorite Primed N Powerful (Jamaica Patton) in the two-hole. The latter came out in the last turn however Talk About Valor was up to the challenge. Casey asked the winner for another gear and the gelding responded by drawing off and proving best by about six lengths.

Longshot (13-1) Majistic Caprice (Ronnie Gillespie) rallied for second while Primed N Powerful faded to third. The 1:55.1 mile was a new career mark for Talk About Valor.

Boogie Fever: The Wilfong family was back in the winner’s circle after their 5-year-old mare Boogie On Down ($4.00), nicely rated by Kyle Wilfong, held off a late move by Skeeter Machine (Ridge Warren) in the aged pacing mare championship. 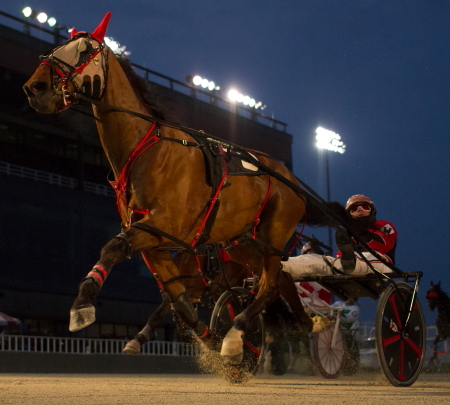 The Brett Wilfong trained home=bred took a full second off her previous best winning mile when she was timed in 1:51.1, a neck better than Skeeter Machine. Boogie On Down is owned by Mr. Lynn Wilfong and Barbara Wilfong of Kentland, Indiana and by Brett and Candice Wilfong of Pendleton, Indiana.

Easy Does It With 11 horses going to the gate in two ISFCS elimination divisions of the 3-year-old colt and gelding pace only Fox Valley Stuart, sixth in the first split, won’t advance to next Thursday’s $29,000 Final.

Hawthorne’s Carey series point leader Maximus ($2.10) pulled away to an easy 1:54.4 victory with driver Kyle Wilfong in the first division for trainer Ken Rucker who shares ownership of the Sportsmaster gelding with The Panhellenic Stable Corp of Oyster Bay, New York.

Fire Drills Foes: In the second division driver Kyle Husted took the 3-5 favorite Meyer On Fire out of the third in the final turn and the Erv Miller trained pacer worn down the pace-setting The Bucket, winning in 1:53 flat for Northbrook, Illinois’ (Marty) Engel Stable LLC.

Fox Valley Triton made a strong surge in the late going to nip The Bucket for second.

Another New Mark: The Saturday finale was a nine horse prep race for Thursday’s $29,000 championship for ICF 3-year-old pacing fillies. When the dust cleared it was the even-money favorite Fox Valley Torrid ($4.20) taking advantage of a pocket trip provided by driver Casey Leonard) and going on to pace a new lifetime mark of 1:52 flat.