Homepage
You are here: Home1 / Mike Paradise2 / A Couple of Gems in Incredible Finale Stakes

Unbeaten Fox Valley Gemini proved again he’s still “King of the Hill” among the ICF 2-year-old pacing colts and geldings, while Al’s Briefs showed he’s a gutsy, up-and-coming force to be reckoned with in the division.

We were also reminded last night that the horse who crosses the finish wire first isn’t always the winner. 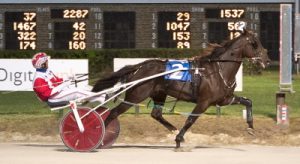 In the initial $16,000 Incredible Finale third round split, Casey Leonard urged Fox Valley Gemini away from the starting gate, to a quick lead and when the prohibitive 1 to 5 favorite went unchallenged to a modest 59 first half, the outcome of the race pretty much wasn’t in doubt and that the son of Yankee Skyscaper would remain unbeaten for Atwater, Illinois owner Jim Ballinger.

The Terry Leonard trainee put away a bid by the eventual runner-up Hart To Heart (Bobby Smolin), at the top of the stretch, when Casey asked the unbeaten freshman for another gear and Fox Valley Gemini ($2.40) obliged, pulling away to his seventh consecutive victory by almost four lengths and pacing the last half of his 1:54.1 mile in 55.1 while under a hold at the finish wire.

The late-blooming Al’s Briefs looked like he was out of it early on, when the 2-1 second wagering choice, sprinted out from the seven-slot only to go off-stride heading into the first turn. 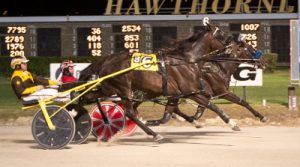 Driver Kyle Wilfong got the Clark Fairley trained freshman back pacing and settled him in at the back of the eight horse field . . . but not for long.

Al’s Briefs ($6.40), was out and going on the backside, then swooped to the front by the half-mile pole and reached it in 58.4, while his supporters were probably wondering if the smallish pacer would have enough left to hold on, after his big second quarter move.

As it turned out Al’s Briefs did, although, it took a gritty effort to keep the 6-5 betting favorite Backstreet Lawyer from getting past at the end of the 1:56 mile. The winning margin was a head for Illinois owners Tony Somone (Willow Springs), Dave Mc Caffrey (Burr Ridge) and Fairley (Charleston).

Ernie The Mooss took third in the second stake division while Lambo was fourth.

The third Incredible Finale split, saw Dandy Dune (Tim Curtin), shake loose in time to power past in the late going, but in doing so the 3-5 favorite’ s bike hit the front legs of the pacer Who Deen E. Dandy Dune was disqualified from first to sixth by the stewards.

The victory went to Song Cycle Senese ($14.00, Kyle Wilfong), who was making only his fourth pari-mutuel career start for trainer Rodney Freese and owner Peter Karras of Sherman, Illinois.

Another lightly raced freshman Sports Creek was awarded second and Piscotty was moved up to third.

The single $16,000 third leg of the Kadabra stake was expected to be a heck of a duel between Springfield and Du Quoin State Fair champion Vic’s Pizza and the Cardinal/Kadabra winner, True Detective, but that showdown evaporated when Vic’s Pizza started running before the gate sprang open. 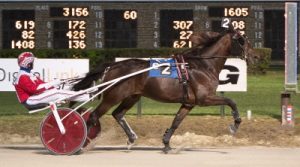 Casey Leonard got True Detective to the head of the field on the backside, and gave the Curt Grummel trained gelding a 30.2 second quarter breather, and the homebred trotter went on to be a convincing 1:59.1 winner.  The victory was No. 5 in 7 career starts for True Detective, owned by his breeder Dr. Patrick Graham.  Cruzen Cassi was second best, while Illinimight held on for third in the sixth race trotting stake.

A Big Miss: Sunday’s headliner is the third race $11,000 Open II drawn by groups. Hawthorne’s morning line has the Kelly Chupp trainee Held In Balance (Tim Curtin), as the 2-1 favorite after his easy win a week ago at a lower level, followed by Pridecrest (Jared Finn), at 3-1 following an Open I victory in 1:55.1 on a “good” track two weeks ago for trainer John Finn.

Pridecrest (pp 8) and Big Expense (pp 7 Kyle Husted), had to draw for the two outside posts based on recent performances. Big Expense was second to Pridecrest in their last start. Previously the Husted trained trotter, won both an Open I and an Open III earlier in August.

Yet somehow, Hawthorne’s USTA computer generated and too often useless morning line, lists Big Expense at 25-1, the longest shot in the race. The 5-year-old gelding may not win the feature, but the horse certainly doesn’t deserve first flash odds of 25-1.

Who’ll be the Big Point Earners Tonight? A Couple of Gems in Incredible Finale Stakes
Scroll to top