Homepage
You are here: Home1 / Mike Paradise2 / A Couple of “Lou’s” Continue to Shine

A pair of “Lou’s” continued to rule their respective ICF filly trotting divisions.

First it was Lous Abigail (Casey Leonard) extending her winning streak to four in a row with a convincing win in last night’s $29,000 Windy Skeeter stake for state-bred sophomore filly trotters. The 1:57.3 mile was a new mark for the Steve Searle trained filly. 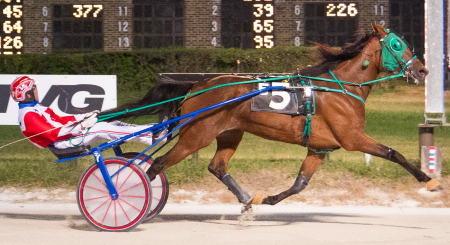 Lous Abigail took an early lead in the race nonetheless Casey was content to let the Searle trained stable-mate Bee Cee take over command when she was brushed to the front by driver Kyle Husted out of fourth.

The pocket trip worked out perfectly for Lous Abgail as the Lou’s Legacy filly powered past her rival in the lane and posted her fourth victory in the month of August for her breeder and proprietor Flacco Family Farms of Alexis, Illinois.

Fox Valley Lush came on to be second while El Oh Govner ended up third.

Later in the evening it was Searle’s two-year-old rotting filly Loulita, also driven by Casey Leonard, an easy winner in the $29,000 Shawnee. It was also Loulita fourth consecutive visit to the winner’s circle and she was another Flacco Family Farms bred trotter, owned by the Alexis, Illinois horsemen and Dr. Patrick Graham of Pittsfield, Illinois.

Juan Franco hustled the Mike Brink trained filly away from the three-slot and the Major Bombay homebred was never headed, drawing off by seven and one-half lengths at the end of a 1:56.1.

Hart’s Hart ($2.20) was hammered down to overwhelming 1 to 9 odds and was well in hand at the finish line for Illinois owners and breeders Donna Crebs (Cantrall) and Judy Conzo (Lincoln). The battle for second went to Bootsy Bombay over Princess Mooss.

Getting Even: Fox Valley Exploit ($3.60), driven by her trainer Kyle Husted, was a half-length winner of the $29,000 Time Dancer stake for second season filly pacers over Sleazy Gal. Last week’s State Fair victor Sign Her Up was third.

The 1:53.4 mile was the Sportsmaster filly’s sixth of the year in seven tries for Husted and co-owner Dave Brigham of Concord, Michigan. 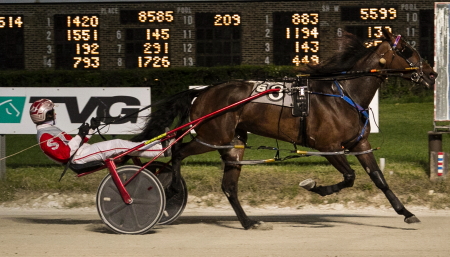 Two Will Do: Back-to-back Opens put the explanation point on Sunday’s expanded 16 race card and they’ll take place early in the evening. The $10,500 filly and mare Open Pace was drawn by groups and will go as race two. An $8,800 Open II for “the boys” will follow.

The Rob Rittof stable’s Tempus Seelster (Travis Seekman) was assigned the outside six slot and will be at 2-1 first flash odds in the distaff co-feature while Perch (Brandon Bates) was allotted the pole position.

Ponda’s Prospect (9-5, Casey Leonard) and On Duty (201, Jim Lackey) are the early programmed favorites in the third race second co-headliner where horses with an Open I or II victory in one of their last two starts were not eligible. They’ll be opposed by Bold And Brassy (Travis Seekman), Park Official (Kyle Wilfong), Dash Of Danger (Kyle Husted) and I’m An Athlete (Brandon Bates).

Can the “Lous” be Stopped? Phillip Martin Passes Away
Scroll to top