Homepage
You are here: Home1 / Mike Paradise2 / A Double Open Treat on Sunday

They’ve doubled up on Opens on Sunday’s Hawthorne card. Both $12,000 co-headliners will come early on the 10-race program and while each is short on numbers, they both look very competitive

First up is the second race Open for fillies and mares. It’s only a five horse field, drawn by groups, and the public’s wagering money should be spread out since you could make a case for any of the five to come out on top. 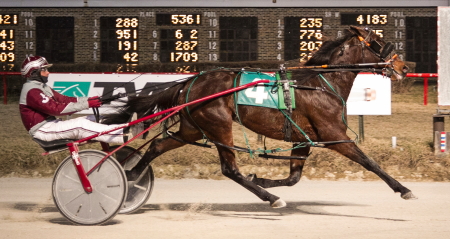 Hosea Williams Rollin Coal was handicapped with the outside five post after consecutive weekend victories, the last in come-from-behind fashion (1:54.2) in a Hawthorne Open at 12-1 odds. A week earlier driver Juan Franco nicely rated the five-year-old ICF mare to 1:55.4 front-end triumph. She’s the 9-5 first flash tonight.

The versatile Rollin Coal has been a regular in the distaff Open and high level conditioned events for the past few seasons and raked in over $50,000 in purse earnings last season for her Chicago owner and trainer.

The other ICF horse in the field is Whiskersonkittens from the barn of trainer Kim Roth. Now seven, the mare boasts 30 lifetime victories and in 2019 year took her mark of 1:51 flat on a “good” Meadowlands track.

Whiskersonkittens (pp 3, Todd Warren) was raced inside in her first outing since last September. After being shuffled back out of contention. Whiskersonkittens paced a 28 final quarter to finish third. Tonight she’ll open at 6-1.

New to the local scene is Black Jack Pat (pp 4, Kyle Wilfong), now trained by Derek Burklund. The six-year-old Well Said mare has been a regular on the Ontario, Canada circuit the past two seasons, often in higher level conditioned races. She had a career best 1:50.2 in last year at Woodbine and Hawthorne’s long stretch could be to her liking. She’s the 2-1 second choice in the Hawthorne program.

Dee Rocks (pp 2, Ridge Warren) was second in Hawthorne’s initial Open to Pretty Image and that earned her an outside (nine) post last week. The Indiana bred mare parked the mile and was never a factor. The Jamaica Patton trained mare is listed at 5-2,

Newcomer Audrey Anna (6-1, Travis Seekman) was assigned the one-slot and has won her last two races at Northfield Park in Ohio for trainer Tim Roach. It’ll be interesting to see how she’ll fare competing also exclusively on a half-miler to racing on a full mile oval.

The bulk of the betting public’s dough will no doubt go to the outside trio comprised of Fox Valley Gemini (pp 4, Casey Leonard), Account Rollover (pp 5, Todd Warren) and Castle Flight (pp 6, Kyle Wilfong). The latter pair traded wins the past two Opens with Castle Flight a dominating front-stepping victor the last time they met.

Fox Valley Gemini (listed at 9-5) found himself too far back in that race (ninth, a dozen lengths behind at the three-quarters) and should benefit from the more favorable starting spot tonight and the smaller field.

Both Account Rollover (5-1) and Castle Flight (programmed at 2-1) are quick from the gate and we could see those two pacers racing one-two most of the way just as they did two weeks ago.

Well handled by Casey Leonard, the 3-5 favorite was taken back at the start as Pine Dream took command at the quarter pole, reached in a modest 30 second. Lindy’s Big Bang was fifth at the half (59 seconds), some five-plus lengths behind the leader.

Nevertheless, in the lane Lindy’s Big Bang powered past his foes and pulled away to a two length win in 1:56.2. The 14-1 longshot She’s Got Bling (Todd Warren) rallied to be second best. Lousraptor nosed-out stablemate Louzotic for third, both another half-length behind.