A horse’s two-year-old season can be and up and down campaign and unfortunately for the ICF filly pacer Double Parked the downward portion of her season came at the absolute wrong time.

The Sagebrush filly started out like gangbusters for her Jackson, Tennessee trainer and owner Leroy Hart. Double Parked won her first three starts and six out of her seven initial trips to the gate.

Double Parked had nearly $40,000 on her card going into the mid-August Springfield Championship however she went winless in her last half-dozen races, adding only $6,000 more to her bankroll while she competed for purses with over $240,000 in total value on the line.

Obviously the filly wasn’t herself towards the end of her juvenile season. 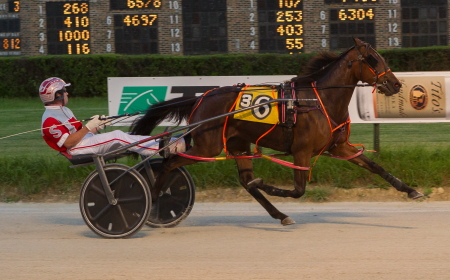 Leroy went on to tell us that his prized Illinois bred filly is healthy now and she’s raring to go.

“She’s doing great. She’s feeling great and looking great,” said Leroy. “I’m just waiting for the word that we’re ready to race at Hawthorne and we’ll be there.”

As a freshman Double Parked quickly showed she was going to be a major player in the state-bred freshmen pacing filly division. The filly came out well prepared for her mid-June debut, which turned out to be an impressive 12-length romp in her division of the Incredible Tillie series leg that went in 1:56.2. A couple of weeks later she motored home in 26.2 to capture the Violet for her third straight triumph.

A bridesmaid place finish in a second leg division of the Incredible Tillie series was followed by three more consecutive victories, including a season best winning time of 1:55 flat in her Springfield stake elimination with regular driver Travis Seekman.

Nevertheless the filly had a rough go of it in the State Fair final, racing much of the way taking in air, and was on empty in the lane, fading to a seventh place finish. And it didn’t get any better for the filly after Springfield.

Double Parked was a tiring fourth in Du Quoin’s Director’s Award stake raced at Hawthorne and was a non-threatening third in a freshman filly contest that followed. She drew the 10-hole in her mid-September Incredible Tillie third leg where she had to work hard to make the front, only to fall back in the late going to end up seventh. On the Night of Champions she went off-stride just as the gate sprang open, putting an end to any chance at the winner’s share of an $115,000 pot.

An $8,500 yearling buy, Double Parked did bank $45,995 as a freshman and if she can stay healthy throughout her three-year-old campaign, she could deliver an even more profitable season for her Tennessee owner and trainer.

If you’re bored while live racing at Hawthorne is not available at this time why not get some action by supporting the Illinois horsemen when you wager horses through the Hawthorne Club app. Clubhawthorne.com is the only current source of income for purse generation during this Coronavirus shutdown.