Hawthorne brings its summer session Thursday night with a unique loaded program, if you’re a fan of ICF stake races.

Of the nine races on the card, six are three-year-old state-bred stake events with the headliner, the $46,700 Cardinal Pace, the final race on the program.

It’s packed with 11-horses (one trailer), and it lured the crème de crème of the Illinois-bred sophomore division with the likes of three-year-old champion Fox Valley Ozzy, Springfield titleholder Get E Up, recent ICF Open winner Kingofmyheart and the current streaking Fox Valley Crete. 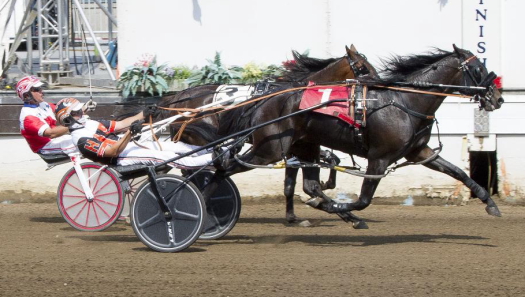 The draw was kind to Kingofmyheart and Get E Up but not so for Fox Valley Ozzy and Fox Valley Crete. The latter pair landed the two outside posts, the nine and the ten, in that order, while the Erv Miller Stable’s Kingofmyheart (Atlee Bender) is sitting pretty with the two slot and Kyle Husted’s Get E Up is in an enjoyable spot with the three.

Get E Up comes off four starts at Hoosier Park where he picked up a 1:52.1 winning mile earlier this month. Kingofmyheart looked good breezing in 1:55.2 last week at the Illinois State Fairgrounds.

Fox Valley Ozzy (Casey Leonard) has been campaigning in Minnesota where he comes off a pair of second place finishes in Open company at Running Aces. Fox Valley Crete looks like he’s going to be a force in his division after rattling off three straight triumphs at Springfield.

The $44,100 Cardinal Trot also came up with 11 starters and last season’s Night of Champions victor Lousdobb figures to get the bulk of the gambler’s money with the pole position and two impressive wins downstate in his first sophomore outings.

Lousdobb (Casey Leonard) was a romping nine-plus winner on May 29th and two weeks ago also breezed with a 1:57.4 clocking. The Lou’s Legacy prodigy annexed the $114,000 Kadabra in his freshman year and went on to capture division honors for Illinois owners Flacco Family Farms (Alexis) and All-Wright Stable (Morton).

With 13 horses entered for each of tonight’s Violet’s, it was necessary to split both the pace and trot into two divisions. The Violet Trot will carry a $23,550 pot while Violet Pace goes for a little more $24,350.

The other Violet trot has freshman division champ Funky Wiggle (Kyle Wilfong) in great shape with the rail in a seven-horse field. The star of the Curt Grummel Stable was impressive when she dominated the filly juvenile division last year, going 8 for 12 and raking in over $130,000 for owner and breeder Dr Patrick Graham of Lockridge, Iowa,

First post for the opener, and every other live night of racing at Hawthorne, is 7:10 pm.

Early Birds Get the Dough Apple Valley, Josie Rocksmyworld Shine, so does Casey
Scroll to top