Homepage
You are here: Home1 / Mike Paradise2 / A Look Back: Harness Racing at Arlington

Forty long years ago Arlington Park, the Midwest’s long-time premier thoroughbred racing facility, hosted back-to-back years of harness racing on its huge mile and one-eighth oval. Those Standardbred meets came in 1977 and 1978 at the northwest suburban facility in the village of Arlington Heights, Illinois.

The harness racing meets came about when Arlington’s sister track Washington Park, also one of the country’s foremost thoroughbred racetracks in the middle decades of the last century, and a popular and successful Illinois facility for harness racing, burned to the ground in February of 1977.

It was a bold experiment because the Chicago northwest suburbs were practically virgin territory when it came to harness racing. There wasn’t a Standardbred track within 20 miles of Arlington Park and no Illinois OTB parlors available to wager at until many years later.

Washington Park was in Homewood, Illinois, a close south suburb of Chicago. It regularly put up average mutual handles of more than $1 million on-track a night and attendances of over 8,500 a program at its harness meetings in the 1970s.

On the other hand, Arlington Park’s initial harness racing meet in 1977 saw its handle substantially lower with a average nightly figure of $661,898. Its nightly crowd averaged 4,640, about 3,900 less than Washington’s. The 1978 Arlington harness handle did have a moderate increase average to $748,504 while the attendance went up marginally with 250 more patrons a night. 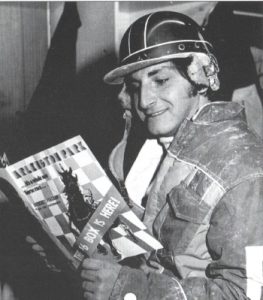 One of the drivers and trainers at the Arlington Park harness meets was the then 26-year-old Carl Porcelli Jr. We caught up to the now veteran Illinois horseman and asked him about racing at those Arlington meets.

“When they first started they tried to go with races of a mile and one-eighth but a lot of fans didn’t like handicapping races that weren’t at a mile and most of the horsemen complained about the longer distance for their horses, so then they tried to go with races of one mile long coming out of the thoroughbred chute but again harness horsemen objected because their horses weren’t used to coming out of a chute with an (open) turn to the left of them, and then a hub rail. Some horses shied away from it. A lot of drivers were grumbling about coming out of the chute with their horses because they didn’t have enough time to get their horses up to speed. So then the track decided to go with mile races on their bigger track where the mile start was actually right on the crown of the turn. Remember back then we didn’t have a staggered starting gate like we have now. If you had a horse coming out of the nine-hole it was horrible. You had to go all-out with an outside horse just to try and keep up with the gate while horses on the inside were going much slower. Eventually they ended up letting the horses go a little later further past the starting mile point, soon after you came out of the turn but those outside horses were still at a disadvantage.” 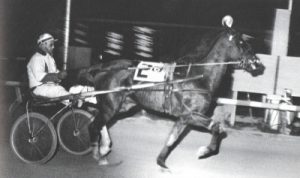 Stan Banks was the leading driver at the 1977 Arlington Park meet and he shared the top spot in 1978 with an up-and-coming driver in his early 20’s by the name of Dave Magee. The track record-holder at the Arlington meet was the future National Hall of Fame pacing mare Silk Stockings with a 1:57.4 mile clocking.

Not long after the 1978 meeting Arlington signed a 10-year lease to conduct its harness racing meet at Maywood Park.

In July of 1985 what started out as a small fire spread out of control and completely destroyed Arlington Park’s Grandstand and Clubhouse when it was owned by a Richard L. Duchossois led Illinois investment group. The facility was completely rebuilt and renamed Arlington International Racecourse.  The older Chicago circuit racetracks were considered susceptible to fires because of their extensive wood structures and antiquated fire codes. Old Hawthorne was built in 1891, Washington Park in 1926 and the original Arlington Park in 1927.

Standardbreds at risk Looking Back: Harness Racing at Arlington Park
Scroll to top