Homepage
You are here: Home1 / Mike Paradise2 / A New Open Pace Champ will be Crowned

It’s a new month so maybe it’s only fitting that for the first time in several weeks a new Open Pace champion will make a stop in the Hawthorne winner’s circle.

The question is: Who will be that horse?

After winning the last three Hawthorne Open Paces, Let’s Drink On It, at least for the time being, may have worn out his welcome on the Chicago circuit. The Joe Seekman trained pacer captured the last three local Opens and is 4-for-5 in the top overnight pacing event.

Also, a no-show for tonight, is the Mike Brink Stable’s Tookadiveoffdipper, who looked very good cruising to a victory last weekend in Hawthorne’s $11,000 Open II pace. He was a likely candidate to be a strong contender in Friday’s Open I contest but he raced, and won for fun, Tuesday afternoon at Du Quoin. 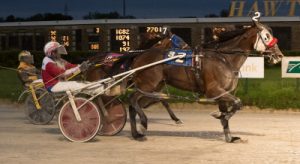 A Bettor’s Risk (Kyle Wilfong), was in all three of his races in July at Hawthorne and two of them came in Opens. He was fourth and then second in his Open starts in August, but he was first over through a 27.1 third quarter, when he was second best to Let’s Drink On It on August 18th, the last time he raced.

Hence, A Bettor’s Risk was assigned the outside nine-hole for tonight’s sixth race feature by the Hawthorne Race Office.

Trashytonguetallker comes off a big effort in last week’s Open when he closed in 26.2 to finish second, beaten by less than one length to the winning Tookadiveroffdipper.

Trashytonguetalker is listed as the 5-2 morning line favorite, with Bettor’s Risk next at 3-1. I see the public favoritism likely going that way as well.

The 4-year-old Hash-Tag Swag, got the worse of it as far as trips are concerned in that race. He was parked-out first up in the middle quarters and did provide live cover for Trashytonguetalker. The Jim Eaton trained pacer swept through a Late Closer series at Hoosier and won the $22,265 final in a quick 1:50.4.

Coal Hanover showed again last week he can leave from the starting gate in a hurry when asked and he was last week, from the outside 9-hole. His up-close journey resulted in a third place finish for the Jim Ellison trainee.

Aimo Hanover was the fourth place finisher last week and that race followed a 1:49 flat victory at Springfield, so you know he has the ability to come out on top tonight for the Tom Simmons Stable.

ER Zack Attack won a mid-August Hawthorne Open III event for trainer Kim Roth in 1:51.4. Earlier this year he won at Mohawk in 1:50.3 and last year sped to a 1:50 flat mile at Hoosier.