Last week Erwin F. Dygert Memorial prep did little to clear up the ICF three-year-old trotting colt and gelding division. Instead, the outlook for the state-bred group of trotters got even fuzzier.

That’s because Mr Mizzou came out of nowhere and popped at 12-1 odds, disposing of the division favorites in 1:58.3 with Juan Franco at his reigns.

The Jim Molitor trained gelding came into the race with one win in 10 tries this season after going winless in seven outings has a freshman. However, Franco carved out a winning journey with the three-year-old Cassius homebred at a tidy winning mutuel of $27.20.

Of course, the complexity of the race changed dramatically when the pre-race favorite Lousdobb, unbeaten in three second season starts, was a late “judges” scratch.

Mr Mizzou came into the race with modest first season earnings of $8,314 and almost $11,000 added in 10 tries this year. Nevertheless, the young trotter last week was given a notable trip by Juan and took advantage of it.

Mr Mizzou drew back inside for tonight’s championship. He has the pole position. Fox Valley Cairo (Kyle Wilfong) starts in the middle of the pack with the five.

Back this week is Lousdobb (Casey Leonard). The streaking Steve Searle trained gelding is in a good spot with the three-post His 1:56.2 victory in the Cardinal was a new lifetime mark for the son of Lou’s Legacy, and it’s the fastest time among the starters by a full second. 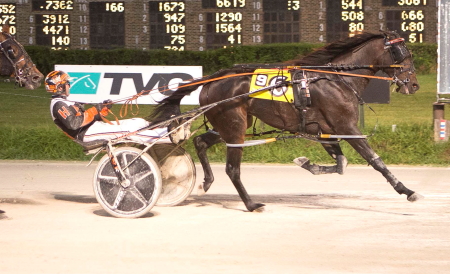 Second $50,000 Final: The other $50,000 championship on the line tonight is the Robert F. Carey Memorial and second season state-bred pacing colts and geldings and it looks like a doozie.

It’s another match-up between last year’s freshman champion Fox Valley Ozzy (Casey Leonard) and Get E Up Kyle Husted), who beat the Gary Rath trainee at Springfield as a freshman and got the job done against his rival in last Friday’s Carey prep and did it racing without cover. His 1:52 mile came on a “good track.”

Note that Get E Up’s win last came with the youngster on Lasix for the first time.

The Carey final is my no means a two-horse race.

Josie Rockmyworld (Travis Seekman), fourth last week, beat “Ozzy” and Get E Up a start earlier in the Cardinal and is back on the rail tonight for trainer Michele Weinmann.

Then there’s Kingofmyheart (pp 7, Atlee Bender) who got stuck behind a tiring horse last week and did well to get third place money.

Don’t overlook Fox Valley Crete who had to work hard to make the front and paced a 56.2 half before weakening in the lane. He has the five slot for driver Juan Franco. This will be the Nelson Willis trainee’s second start on Lasix.

Important Freshmen Elims: Also, on an excellent Friday night card are three elimination divisions of the Incredible Finale for two-year-old ICF male pacers. It’ll take a third-place finish of higher to be assured of making next week’s Championship.

A drawing among the trio of fourth place finishers will determine the final starting berth.

The Kadabra eliminations will go in two $12,000 divisions with the top five finishers in each advancing to next weekend’s finals.