Homepage
You are here: Home1 / Mike Paradise2 / A Perfect Ending in the Fox Valley Flan Final

The prohibitive 1 to 9 favorite kept her record perfect with her seventh consecutive victory in as many career starts for trainer Curt Grummel, who shares ownership of the Lou’s Legacy filly with Craig and Leo Grummel, all of Carrollton, Illinois. 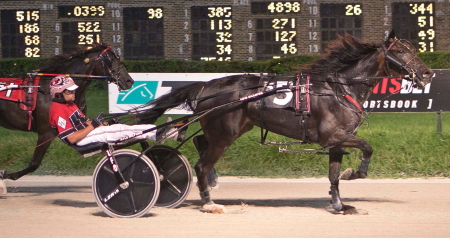 Marvelous Mystery (Kyle Wilfong) stayed perfect in her freshman campaign with a victory in the $50,000 Fox Valley Flan summer trotting championship. It was the Curt Grummel trained filly’s seventh straight win in as many career starts. (Four Footed Fotos)

Marvelous Mystery was given another patient driver by Kyle Wilfong who had the Lou’s Legacy filly in fourth in the first half of the mile.

Longshot Trotamileinmyshores (Richard S Finn) had the early lead, taking the field to a :29.4 first quarter but driver Caser Leonard knew it would be much better to be ahead of a 99-1 longshot then behind one and took Dawn Of Creation out of the two-hole and into command.

Wilfong had Marvelous Mystery out of fourth soon after the half mile marker, reached in 1:00.3, and steadily gained ground on the leader. The pair raced side-by-side through most of the stretch drive before Marvelous Mystery ($2.10) went right on by in the late going and won by one and one-half lengths in 2:00 flat.

The $25,000 winner’s share of the $50,000 pout boosted Marvelous Mystery’s first season earnings to $53,222 with Springfield, Du Quoin and Hawthorne’s Night of Champion stake championships still on the horizon. 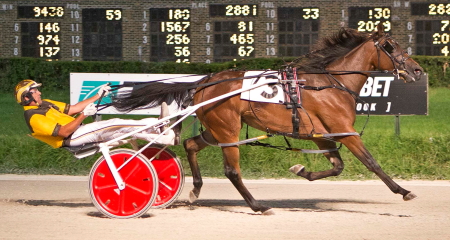 No “Chalk” This Time Two races later it was the $50,000 Incredible Tillie summer showdown for freshman pacing fillies and this time the “chalk players” bet down the wrong Mike Brick trained filly as Rona Mae (Phil Knox) at 12-1 knocked off her stable mate My Daddy’s Revenge (Todd Warren), hammered down to 1 to 5 odds.

Rona Mae, a daughter of Time To Roll out of the Sportsmaster dam Leah Mae, proved to be fastest in the lane, winning in 1:54 flat by almost three over Daddy’s Revenge.

Knox had Rona Mae in third through much of the early going as My Daddy’s Revenge came out of third and took the lead over One R Andis Star (Kyle Husted) before the 57.2 half.

Rona Mae started her bid racing first over soon after the half and simply worn down the previous undefeated My Daddys Revenge in the late going. The Magical Woman (Atlee Bender) came on to be third.

The victory was the third in a row for Rona Mae, owned by her breeders Hugh Lake and Susan Lacey of Joplin, Missouri. The winner paid an attractive $26.60 as her season earnings jumped from $11,233 to $36,233,

Fox Valley Kia, driven by her trainer Phil Knox, was the front-end winner of the Incredible Tillie Consolation. The 6-5 favorite trimmed more than two seconds off her previous fastest mile with a 1:56 flat clocking for owner Julie Collins of Bullhead City, Arizona.