Homepage
You are here: Home1 / Mike Paradise2 / A Picture-Perfect Start for Hawthorne Meet

When Hawthorne begins their summer harness racing meetings tomorrow (Friday) evening its players will be treated to a new look with the conversion to HD, an innovative and attractive graphic package, and additional camera angles from the paddock. 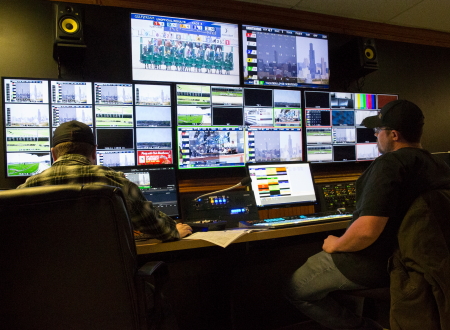 Here’s a look at Hawthorne’s new TV control room providing a sharper image with the conversion to HD and with more attractive and informative graphics for its viewers. (Four Footed Fotos)

Whether you’re viewing Hawthorne Standardbred races from a TV set, a computer or a mobile device, you’ll find a cleaner and crisper picture, easier to read informative graphics and additional interesting camera views from the paddock.

As you can see my the pictures posted with this article, the new TV control facility was totally rebuilt and modernized to the point where it doesn’t take a back seat to any other racetrack TV room in the country.

Coinciding with the camera upgrades was the installation of a closed circuit race viewing system for the stewards, as well as a new assortment of graphics to view for the racing fans.

Hawthorne partnered with International Sound Corporation to make the conversion to Hi-Def that began immediately following the end of the fall/winter thoroughbred meet in mid-January.

“The move to high definition is something we have been looking into for quite some time,” said Hawthorne President and General Manager Tim Carey. “The toughest part has been finding the time to make the conversion, since the process takes two months. This year we had the time between the winter and spring thoroughbred meets to make these upgrades. 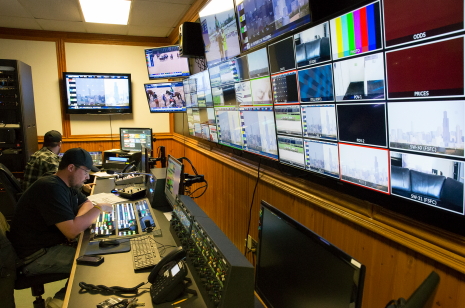 “We truly believe that things are headed in the right direction for racing in the state of Illinois,” continued Carey. “We continue to work with the horsemen’s groups and racetracks in the state, along with the legislature to expand gaming at the racetracks as well. I believe 2019 will be a big year for Hawthorne and the move to HD for our racing signal is a great start.”

Status Quo: First post nightly at Hawthorne will be at 7:20 pm. Unlike last year, its first race on Kentucky Derby Saturday was not moved up for this weekend.

Gem of a Headliner: The opening night feature is a $12,000 Open Pace. Fox Valley Gemini, the Illinois Harness Horse of the year in 2017 and 2018, will make his 4-year-old debut in the second race headliner.

We’ll have more on Fox Valley Gemini and the race in Friday’s column.