Homepage
You are here: Home1 / Mike Paradise2 / A Trick or a Treat for Illinois Based Trotters?

This weekend it comes down to one last chance for ICF 2 and 3-year-olds of both gaits, to perform well enough to make their respective finals on Hawthorne’s Night of Champions, a week from Saturday night.

As it turns out, the older state bred pacers and trotters won’t have to earn their way into a championship.

Both the Plesac trot for ICF 3-year-olds and up and for the Maurello for fillies and mare Illinois bred pacers, didn’t have enough entries to merit eliminations races and instead a $15,000 Prep will be contested this week for both of those $50,000 championships on September 23rd.
.
Thursday’s card will be headlined by the second race Plesac Prep with the Pennsylvania invader, Tricky Nick, looking like a heavy favorite over his six ICF trotting opponents. The 5-year-old son of Band’s Gold Chip is now trained by Richard Perfido for Mt. Bethel, PA., owner Tom Mattingly, after he was acquired in July of 2016.

Tricky Nick has hauled in over $80,000 this year and it’s a good bet he’ll add to that total after he leaves town following the Plesac. The trotter has been raced almost exclusively at The Meadows, often in either high-conditioned or preferred events and has hit the board on a consistent basis.

Regular driver Jim Pantaleano is expected to come in to drive Tricky Nick tonight and in the Plesac Championship. 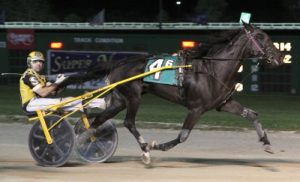 You might remember Tricky Nick from his younger days racing in Illinois. He was bought as a yearling by the Megan Rogers Stable (Chicago) and Derek and Amy Jacobus (Lewistown), for only $2,600 at the 2012 Illini Classic Sale when his name was Ambitious Band.

Tricky Nick won 7 of 10 starts racing for trainer Nick Prather as a 2-year-old, including the Du Quoin County Fair Challenge and an Illinois Dept. of Agriculture event at Springfield.

Tricky Nick began racing as a 3-year-old for Prather and then went to the Carl Porcelli Stable after his first seven starts, where he captured a Springfield State Fair stake and the Su Mac Lad Prep before leaving our state and joining the Norm Parker Stable.

Tonight’s race at Hawthorne will be Tricky Nick’s first in Illinois since November of 2016. He’s added over $165,000 on his card since his Illinois departure.

Note that this is the same sometimes amusing, sometimes embarrassing, USTA computer generated morning line that listed Big Expense at 25-1, the longest priced horse in Sunday’s Open Trot when he went off at even-money and finished second, beaten by only a neck.

Homeward Bound: Back in our state for a crack at the $50,000 Maurello Championships for ICF fillies and mares ages three and up are the ICF distaffers State Street Baby, Art Angel Baby and Joyful Game. They’ll be challenged in Friday’s $15,000 prep by Illinois regulars: Bucklegirl Bobette, Whiskersonkittens, Phyllis Jean, Fox Valley Charm and LK’s Nancy Lee.

State Street Liz, still owned by her breeder Chris Choros of Calumet City, Illinois, has hauled in over $40,000 this year racing almost exclusively in Ohio for trainer and driver Jim Brewer.

Art Angel Baby comes in from Canada and earned $36,051 this year competing at Woodbine and Mohawk. Bred by Freedom Hill Farms, she now races for a foursome of Ontario owners and is under the care of Illinois trainer Bob Rittof for her Hawthorne outings.

Joyful Game competed in last year’s Maurello final and has made the return trip from the east coast, where she raced a good portion of the time at Yonkers and the Meadowlands for Rock & Roll Stable of Chicago and Rick Dane Jr., the former Illinois horseman, who now resides in Port Jervis, New York. Joyful Game, with $46,847 in season earnings, currently is in the barn of trainer Kim Roth.