Homepage
You are here: Home1 / Mike Paradise2 / A Tricky Situation in the Plesac Trot

By Mike Paradise
With most of the attention, and deservedly so, on Thursday night’s the fourth and final legs of the two and three-year-old trotting stake series, there’s an intriguing late race (the ninth) that is being overshadowed.
It’s the single stake elimination of the Plesac stake for IFT trotters of both sexes. With an 11-horse field only the last place finisher won’t advance to the $50,000 Final on Hawthorne’s Night of Champions stake bonanza.
However, this elimination could tell us a lot about the chances of the finalists who’s owners put up a $500 starting fee for tonight’s elim and a shot to move on and race for the highest purse ($50,000) being offered this year in the state for older ICF trotters.
Six mares—Little Ms Chrissy, Sara The Spy, Trot Fudge Sundae, Maple Groove Karen, Macie Rae and Ants Iner Pants—will square off against five of the opposite sex—Master of Excuses, Rock Hollywood, Riet’s Kid, Tricky Nick and Captain Greedy, saddled in the second tier.
With a “trailer” in an 11-horse field it’s likely some of the outside horses will be going out with hopes of landing good early position. If not, starting tenth or eleventh and about a dozen lengths behind the early leader could make for a problematic journey to snare tonight’s winner’s share of a $12,000 pot.
There was one entry for the Plesac that I didn’t see coming and that’s Tricky Nick, who was vanned in from Pennsylvania. Now four, you might remember this son of Band’s Gold Chip as a successful 2 and 3-year-old.
Tricky Nick was the Springfield County Fair Challenge champion at two for trainer Nick Prather and came away with the Springfield State Fair Colt Stake Championship at three racing out of the Carl Porcelli Stable.
His owners, the Megan Roger Racing Stable of Chicago, sent Tricky Nick to Pennsylvania soon after his Springfield title and the trotter did well racing for trainer Norm Parker.
This year Tricky Nick was a six-time winner for Parker, twice for a $12,000 purse at The Meadows, and four times at Miami Valley Raceway in Ohio, including a $25,000 pot back in April.
Tricky Nick was laid off the month of May and then had four unsuccessful starts this summer before he was acquired by his present Pennsylvania owner and his current conditioner by Richard Perfido, 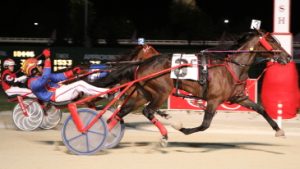 The fastest lifetime mile in tonight’s Plesac elimination belong to the six-year-old mare Little Ms Chrissy (pp 3, Brian Carpenter) and is now under the care of trainer Herman Wheeler. As a four-year-old she rattled off a 1:53.4 mile.
In her freshman campaign Little Ms Chrissy hauled in almost $130,000 for Taylor Racing of Bolivar, Tennessee when she took the Lady Lincoln Land Final, the Violet Championship and a Hanover, all at Balmoral.
The richest bankroll in the field belongs to another mare, Jim Bafia’s Trot Fudge Sundae with $407,898 banked. She was the Illinois 2-Year-Old Filly Trotter of the Year in 2012 and took the same honor as a 3-year-old a season later. In 2012 Trot Fudge Sundae became the first Illinois bred to capture the American National 2-year-old filly trot final in that stake’s long history.
Another Switcheroo: First post at Hawthorne has been moved back to 7:10 pm which no doubt will be dragged out closer to 7:20. If my math is right this is the third post time change at the meet that started in May and hopefully the last for the “we-can’t-make-up-minds” decision makers.
http://harnessillinois.com/wp-content/uploads/2021/03/ihha_logo_white_wtext_v2-300x130.png 0 0 Mike Paradise http://harnessillinois.com/wp-content/uploads/2021/03/ihha_logo_white_wtext_v2-300x130.png Mike Paradise2016-09-01 12:41:102016-09-01 12:41:10A Tricky Situation in the Plesac Trot