Homepage
You are here: Home1 / Mike Paradise2 / A Wet Ending to Hawthorne’s Meet 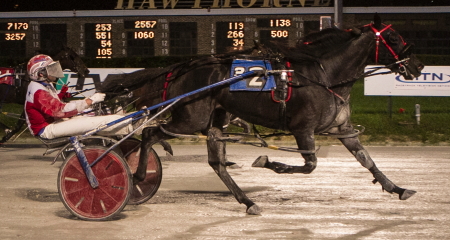 Sunday was closing night for the 2019 Hawthorne harness racing season and there were two Night of Champion Consolation stake races to be decided as well an Open II trot.

It would have been nice to conclude the racing season on a balmy evening with clear skies but Mother Nature had another plan. Instead it rained a good portion of Sunday and a sloppy racing strip awaited both competing horses and their drivers.

A field of a half dozen state-bred three-year-old pacing fillies went postward for a $15,000 pot in the Plum Peachy Consolation and it was Foolishlittlegirl ($6.00) fastest in the lane with a 1:55.4 clocking, knocking two full seconds off her previous best mile.

Casey Leonard had the Rick Schrock trained filly in third, right behind the pocket horse Caroline GR (Ridge Warren), the 4-5 favorite as Yankee Joanie (Bobby Smolin) took the field to a 56.3 first half in the slop.

GR Caroline was tipped out in the final turn and Casey did likewise with Foolishlittlegirl, overtaking the public’s choice in the late going for Sherman, Illinois owner Peter Karras.

Lou, Lou and Lou: The $15,000 Kadabra Consolation for two-year-old male trotters turned out to be an easy win for the 1-2 favorite Lou Paschal ($3.00), driven by Ronnie Gillespie for trainer Roshun Trigg. 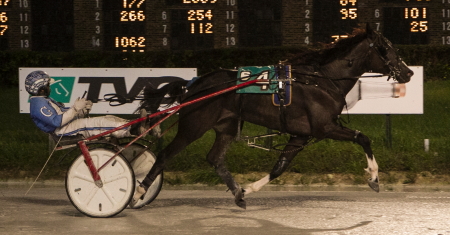 Lou Pascal shot to the front right from the get-go and was never seriously challenged, splashing his way to a 2:00.3 mile for his owners and breeders Flacco Family Farms of Alexis, Illinois who also bred the second and third place finishers Lousintuit (Kyle Husted) and Lous Paisiano (Steve Searle).

Lou Paschal’s victory was his ninth as a freshman. Earlier in the summer the son of Lous Legacy rattled off six consecutive wins.

Cashing In: The 12-1 longshot Double A Cash Hall (Luke Plano) rallied down the stretch to snatch the $10,000 Open II trot away from the even-money choice Walter White.

Three different horses at one time at another had the lead through first half (:58) before Walter White (Casey Leonard) zipped to the front and looked to be in good shape mid-way down the lane except Double A Cash Hall ($26.80) kept gobbling up ground and got past him in deep stretch.

Double A Cash Call is trained and owned by Scott Galloway of Otsego, Michigan.

Not Quite Done: Hawthorne’s Standardbred harness season is over however there’s still one start on the horizon in the state of Illinois for some ICF horses It’s Saturday Fall Classic on the Illinois State Fairgrounds at Springfield.

Races will be held for ICF horses in classes for two, three, and four-year-olds and upward with $75,200 in total purse money, divide equally, on the line.