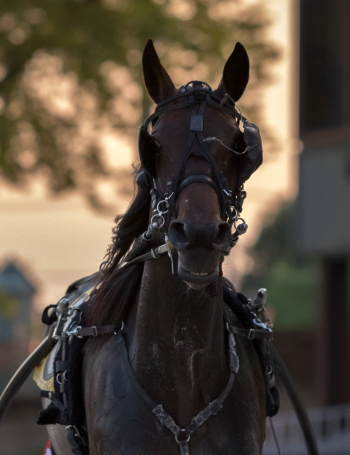 At the age of seven Annas Lucky Star is showing no signs of slowing down.

On Saturday afternoon the Nelson Willis trained trotting mare won for the 45th time in her brilliant career and continued her domination of ICF rivals.at the Illinois State Fair in Springfield.

Driven by Kyle Wilfong, the Illinois trotting queen made it back-to-back Illinois State Fair Colt Stake championships in the aged mare division. She has now been the ISFCS champion six consecutive years, starting as a two-year-old, for Salem, Illinois owner and breeder Danny Graham.

Lous Abigail (Ridge Warren) at 30-1 raced well to be the bridesmaid behind the front-stepping winner while her stablemate Louzotic came on for third.

Another Gem: Three-time Illinois Harness Horse of the Year Fox Valley Gemini hardly broke out in a sweat while winning another Springfield aged pacing colt and gelding title with Casey Leonard at his lines.

Leonard had “Gemini” on the front before the first turn and with a 58 and change half, basically, the race was all over. The pocket horse He Gone Jack (Ridge Warren) was second best in the 1:54.1 mile. 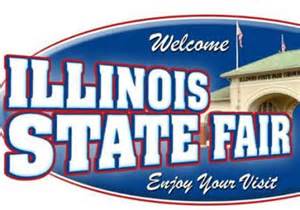 “Fresh and Frisky”: The ISFCS championship for aged trotters followed and Talk About Valor showed that 28 days in between starts couldn’t keep the six-year-old Gerald Hansen trainee from his fourth victory in six season outings.

Given a two-hole journey by his driver Travis Seekman, the time of 1:54.4 was a career fastest for the Yankee Valor gelding owned by Shelley Steele of Momence, Illinois.

Lousraptor (Juan Franco) came on to be second, beaten about two lengths, while the pacesetting Louscardamon (Casey Leonard) held on for third.

A Three-Peat: Fox Valley Exploit, driven by her trainer Kyle Husted, made it three consecutive Illinois State Fair championships when she captured the aged pacing mare showdown in 1:53,1, the fastest mile of the day on a “fast” but drying out racetrack.

The now four-year-old mare, co-owned by Husted and Michigander David Brigham, had to race outside of the front-stepping My Uptown Girl (Todd Warren) for more than a quarter of a mile before pulling away late in the lane.

The 1 to 5 public’s choice Hart’s Heart (Kyle Wilfong) raced three-wide on the final turn before going on to power past the early leaders with a 1:55.3 victory in the prep for ICF filly sophomore pacers.

Get E Up (Kyle Husted) ended Fox Valley Ozzy’s (Casey Leonard) unbeaten streak at four in row with a head decision in the second two-year-old elimination for male pacers.

The Kyle Husted trained Get E Up stalked Fox Valley Ozzy from the backside on and zipped by in deep stretch at the end of a 1:58.4 mile on a “good track.”

Kingofmyheart (Atlee Bender) obtained his maiden win (2:01 flat) a couple of races earlier in the first freshman pacing colt division with a neck decision over the 4 to 5 favorite Frontier Bombay (Todd Warren).

Also advancing to the final were the division’s Major Grin, Knox The Fox, Titotito. Spoken For, Magazine Theme and Cole Thornton.

The even-money choice Lousdobb (Kyle Husted) took the first colt and gelding trot division in 2:02.3 for trainer Steve Searle, while the Mike Brink Stable’s Fox Valley Cairo (Ridge Warren) came on to secure a victory in the second grouping with a 2:01.1 mile.

The 1:58.1 mile was the first career victory in five trips postward for Lady Bombay.

The overwhelming 1-9 favorite Fox Valley Captiva went off stride in the second filly in split and the 12-1 longshot Iwannarockroll, nicely handled by Travis Seekman, took advantage of the situation, coming on in the stretch to pop for the first time with a 2:00 flat clocking.

The Mike Rogers trained Loz Say When had lost his first 28 starts before pulling off the surprise victory in 2:01.1.

The 4-5 first division public’s choice Rndmnunpredictable (Casey Leonard) made a bad break at the start, fell back 23 lengths behind the field at the first quarter pole, and still came on to finish third, beaten less than two lengths and advanced to the male sophomore trotting championship.

Breeze At Sunset worn down the 4-5 favorite Lolita (Casey Leonard) in the final strides to win the three-year-old trotting prep in 1:59.4. The victory was the third on the early program for driver Atlee Bender and trainer Erv Miller.

While the first Springfield card was conducted on a “good” racing surface, the second portion of the program was upgraded to “fast.”