Harness racing may be the only sport where the participant is penalized if he or she has too much success and not surprisingly that doesn’t sit well with some people.

One of those individuals is long-time Illinois owner Danny Graham of Salem, Illinois after learning that his prize five-year-old mare Anna’s Lucky Star was assigned the 10-hole in Sunday’s seven horse Open Trot field. 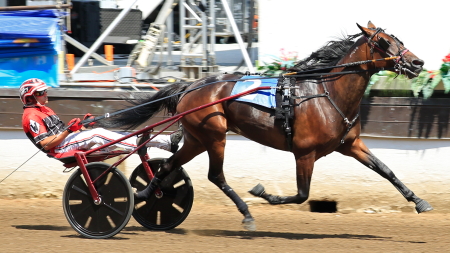 “I would have been okay with it if we were given the seven and Pine Dream got the six,” continues Danny. “But Sunday’s assigned posts seem a little ridiculous to me,”

Anna’s Lucky Star and Pine Dream have met in three of their last six starts with “Anna” winning twice, once by a head and then by three-quarters of a length while Pine Dream took a nose decision over the Illinois-bred mare on July 7.

“If I remember right they did this to us one time before,” said Danny. “We won a few Opens in a row and they gave us the 10-hole and we finished third that day.

Last summer “Anna” won three straight Hawthorne Opens and then ended up third with a 10-hole start. Ironically that race went to Walter White, who starts from post five Sunday in the third race $12,000 feature. 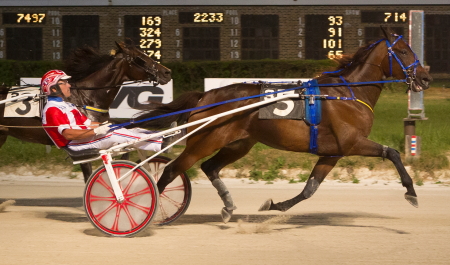 Anna’s Lucky Star wasn’t the first ICF trotter to be punished by the Hawthorne Race Office for doing too well. Earlier in the 2018 summer meeting the late Picky Picky Valor was riding a five race winning streak, one came in a conditioned trot, a pair in Open III events and two in Open 1 trots, when the Gerald Hansen trainee was dispersed to the 10-hole with less than a 10-horse field.

I’ve been around a long time (some might think forever) and I can’t remember an Illinois bred trotting mare reprimanded with a 10-hole start with less than a full field against older, more seasoned open company trotters.

“Anna” has made 52 lifetime starts. Only the four-year-old Talk About Valor, assigned the one-slot Sunday has made less trips to the gate. All of the other male trotters in the race have gone postward at least TWICE as many times in their racing careers as the “Queen” of the Illinois trotting ranks.

And while the Nelson Willis trained mare has notable career purse earnings of $311,625, that’s still only fourth highest in Sunday’s seven horse field.

When informed that his mare wasn’t the only trotter with the assigned post Sunday since Mandeville was allocated the six, Graham said: “That’s got to be a mistake. That horse hasn’t been doing well the last few weeks. If anybody should have been assigned the six Sunday it should have been Pine Dream.”

I doubt that Mandeville’s owner is delighted with the horse’s designated Sunday post.

“We weren’t planning on taking “Anna” to Du Quoin but now I’m not so sure,” said Danny. “Let’s see how she does Sunday and how she comes out of the race. “Then we’ll make the decision on Du Quoin.

“I’m not saying she can’t win Sunday but I certainly would like her chances a lot more if she wasn’t starting so further outside than the other horses.”

Race Schedule Juggled: With the Du Quoin State Fair meet coming up next weekend there are some major changes on the Illinois harness racing schedule.

Hawthorne will race this upcoming Thursday night. They won’t on Friday and Saturday. Instead Du Quoin will conduct its abbreviated meet both nights with a 7 pm post time on Friday and at noon on Saturday. Hawthorne is then back with its live racing on next Sunday with a 7:20 first post.

Having Fun Winning: The Brett Wilfong trained mare It’s Time For Fun got back on the winning track Friday night with a compelling victory in the $12,000 filly and mare Open Pace.

Driver Kyle Wilfong dropped the public’s choice into fifth in the early going when there were three lead changes with Boogie On Down (Casey Leonard) on top at the 27.4 first quarter. Kyle tipped It’s Time For Fun out soon thereafter and the four-year-old mare zoomed past her stable-mate and took command before the 55.4 half.

It’s Time For Fun ($4.20) had a big enough lead in the lane to hold off the late-charging Sweetshadyshark (Ryan Anderson by three-quarters of a length. The win was the home-bred mare’s fourth in five starts at Hawthorne’s summer meet for owner and breeder Mr. Lynn Wilfong of Kentland, Indiana.