Harness racing at the 2021 Du Quoin State Fair concluded Saturday afternoon but not before more ICF champions were crowned after proving best in some historic stake events.

The nine-race card was conducted on a hot (92 degrees) and humid (65 %) afternoon with the Heat Index reaching 103 degrees, making the track conditions fast but obviously uncomfortable for harness racing fans, horsemen, and their horses alike.

Here is how last day of racing at Du Quoin unfolded:

It was a blanket four-horse finish in the aged pace for state-bred fillies and mares with Skeeter Machine, No. 5, Casey Leonard) nipping No. 4 Fox Valley Exploit, with No. 3 Shelly On My Mind and No. 2 My Uptowne Girl close behind. (Four Footed Fotos).

Getting Even: The Jim Molitor trained Ryans Loan Shark, capably handled by Travis Seekman, came motoring down the stretch to take the $28,000 Dudley Hanover opening stake for ICF sophomore pacing colts and geldings.

Second best in a photo finish at Springfield, Ryans Loan Shark ($5.20) bounced back on a “fast” sunbaked Du Quoin racing surface with a 1:54 mile, almost two full seconds off the geldings previous fastest.

Springfield champion Ideal Big Guy cut the fractions, going to a 57 flat first half with Ryans Loan Shark in the middle of the pack. However, in the lane Ryans Loan Shark powered past with authority for his fourth season win for owners Flacco Family Farms (Alexis, IL), Dave Falzone (Chicago) and trainer James Molitor (Chicago).

Getting It Done: With trainer Kyle Husted at his lines the overwhelming 1 to 5 public’s choice Get E Up put away a stretch bid by Kingofmyheart (Atlee Bender) to win the prominent $33,000 Governor’s Cup for two-year-old state bred colt and gelding pacers.

Co-owned by the trio of Husted (Altamont, Illinois), John Schwartz Jr. (Wood Dale, Illinois) and David Brigham (Litchfield, Michigan), Get E Up covered the mile in 1:52.1 after taking over the lead on the backside and going to a 55.3 half. 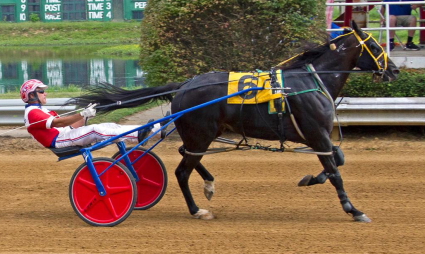 Oldie a Goodie: Given a golden garden trip by Casey Leonard the 11-year-old Clark Fairley trained Sadies Art ($6.60) pulled away in the lane to capture the $7,000 aged pace stake for ICF males aged four and up.

Owned and bred by Mary Alice and Tom D Tetrick of Geoff, Illinois, the “old-timer” of the field sprinted out from the starting gate and took the two-hole behind the 7-5 favorite He Gone Jack (Ridge Warren) who was able to cruise to 57 first half mile.

However, He Gone Jack weakened in the lane after being passed by Sadies Art and ended up third behind the eventual runner-up Backstreet Lawyer (Kyle Wilfong) as well.

State Fair Sweep:  Fox Valley Cairo, perfectly rated by driver Ridge Warren, made it back-to-back victories at the Illinois state fairs by taking the $33,000 Darn Safe stake by more than one length over the first over Lousdobb (Casey Leonard).

The Mike Brink trained two-year-old gelding took command before the first quarter pole (30 seconds), got away with a leisurely 59.4 half and had more than enough left for the late going to hold off Lousdoob, who took air from the backside on,

Lous Di Nomite, one of five offspring’s of the Alexis, Illinois sire Lous Legacy in the seven-horse field, came on for third. 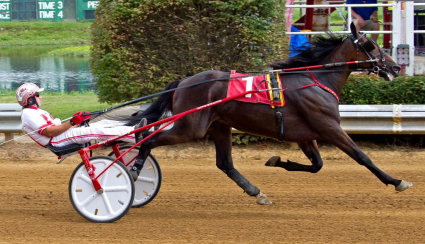 A Surprise Ending: The last of the major ICF stakes Saturday afternoon was the $7,000 showdown for aged filly and mare pacers, and it turned out to be a four-horse blanket finish with the 6-1 Skeeter Machine, driven by Casey Leonard, coming out on top with a nose decision.

The 6-5 second choice My Uptown Girl (Ridge Warren) had the early lead but soon after a 56.1 half the 4-5 favorite Fox Valley Exploit (Kyle Husted) came at her and took command at the top of the stretch.

Meanwhile Skeeter Machine fanned out for the stretch drive and finished the fastest for trainer Alan Bowen, giving the six-year-old mare her 26th career victory. The daughter of Big Green Machine is owned by 99-year-old Francis Greer of Mt. Sterling, Illinois and James Greer of Peoria, Illinois,

The Du Quoin card wasn’t the end of harness racing in Illinois on Haturday, Hawthorne took over the Standardbred baton with a nine-race card in the evening with a 7:10 first post.