Driver Kyle Husted hustled the 6-year-old Walter White gelding away from the six slot and into a quick lead, taking the field to a 28.1 first quarter. With no early challengers Husted was able to back Jim Eaton trained gelding down to a 29.2 second quarter and the 5-2 second betting choice reached the half-mile pole in :57.2.

Handicapped with the 10-hole in a 7-horse field, Anna’s Lucky Star (Kyle Wilfong), was last at the first quarter, some nine lengths behind, and was still fifth, trailing by almost six lengths at the half while Picky Picky Valor (Casey Leonard) was getting a two-hole trip.

Walter White got another soft quarter, trotting the third panel in :28.4 and had more enough left in the tank to put away a stretch bid by the eventual runner-up Picky Picky Valor. Louscipher rallied strong to be third and Anna’s Lucky Star was a non-threatening fourth in the 1:54.2 mile. 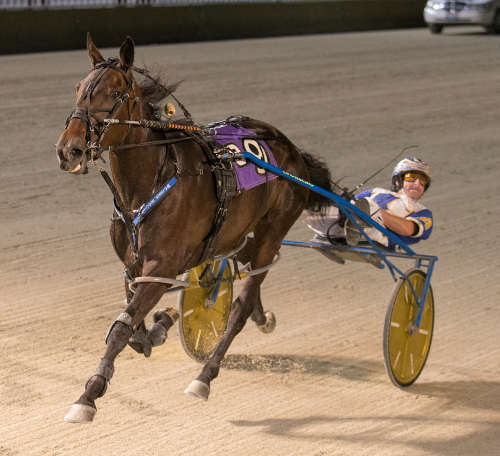 Bucklegirl Bobette and driver Ryan Anderson were all by themselves at the end of a 1:50.34 mile in last night’s Open II for pacing fillies and mares. (Four Footed Fotos)

Anna’s Lucky Star’s fourth place finish was the first time she failed to be 1, 2 or 3 in 8 season starts as a 4-year-old. The assigned start from the 10-hole obviously put the mare in a disadvantageous situation right from get-go.

Interestingly, Picky Picky Valor’s earlier three race winning streak in Hawthorne Opens also came to abrupt end a month ago when the Gerald Hansen trainee was also saddled with an allocated 10-post. That one came in a six horse field.

Just Bobbin Along: Later Saturday evening Bucklegirl Bobette (Ryan Anderson), again showed her heels to the opposition with an easy five and one-half length victory in the Open II Pace for fillies and mares.

The 1:50.3 mile equaled the Rob Rittof trained mare’s career best time, set a week ago for Illinois owners Robert and Charles Walker, and Robin, all of Carrollton, and Hart Walker of Jerseyville. It was also the 20th lifetime victory for the 5-year-old ICF mare sired by Duneside Perch.

Bucklegirl Bobette ($4.40) sprinted out at the start from the nine-hole and was dropped into third by Anderson in the first turn. However Ryan took her out soon after the first quarter (28.2) and the mare cleared to the top. A 28 flat second quarter was followed by a 27.2 third panel. From there Bucklegirl Bobette drew away from the field down the lane, coming home in 26.4 while still well in hand.