Homepage
You are here: Home1 / Mike Paradise2 / Avenatti Finding His Niche at Hawthorne

One of the young drivers at Hawthorne is Matt Avenatti. The 23-year-old and his younger brother Wyatt are sons of the veteran Illinois horsemen Dave Avenatti who has been a staple on the state’s County Fair Circuit for a number of decades.

While the soon-to-be 21-year-old Wyatt is now driving at Bluegrass Downs in Kentucky. Matt has remained at Hawthorne and as the meet as gone on the number of driving opportunities for him has grown.

You might think when your father is a long-time horseman that would have always been the path to take from the time you are a little kid.

“I’ve been around horses all of my life but when I was younger I didn’t really think about it to make a living,” said Matt. “I went to college (Wabash, Indiana) and ran track there. It was in college when I thought about it as a career.

“I won my first Fair race at Martinsville in 2013 and then later that summer I won my first pari-mutuel drive at Lexington, Kentucky. I thought to myself ‘this is too easy’. 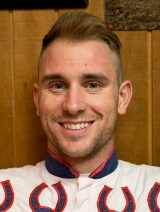 Of course, Matt was a naïve 19-year-old at that time. Now he’s a month away from his 24th birthday and has learned, the hard way, success in this business doesn’t come easy. It takes a lot of hard work and even then there are no guarantees of having a fruitful career as a driver and or trainer.

This is Matt’s second season at Hawthorne and while things got off a little on the slow side this year for the native Illinoisan, they have picked-up lately.

Avenatti had five drives last Sunday, a high number for him on a Hawthorne card, and pulled off a surprise victory in the first race with Eligio Boccia’s Lacarmeliliana, a 10-1 longshot. Matt also had second place finishes Sunday with Fancy Creek Jolene in the fourth and Muscale the ninth.

When you’re a young driver or one without years of driving experience you rarely find yourself going postward behind one of the favorites. Most often you’re driving a horse whose trainer would be happy to get any kind of a check in that race.

That’s why it wasn’t surprising to sees some of Avenatti’s winners at Hawthorne meet light up the tote board at huge prices. When he won a division of the opening round of the Plum Peachy with the Kim Hamilton Stable’s Fancy Creek Jolene the filly popped at 45-1 odds.

Fancy Creek Jolene’s victory came as a shock to most of the Hawthorne bettors but not to Matt.

“She raced big the week before the first time I drove her when she came from far back to be second and they told me she bled. They treated her and put her on Lasix and in her next start in the Plum Peachy she came home in 26.1 and won. I believe Fancy Creek Jolene is one of the top three ICF 3-year-old pacing fillies at the meet.”

A week later Matt steered the ICF trotter Storm Winds to her maiden win at odds of 30-1 for trainer Ivar Hyngstrom.

“He trots really well in the turns. When he gets to the straightaways he switches the lead and is a bit of a different animal. But when I won with him I never touched him with the whip. I just let him do his thing and never urged him.”

Last night Matt drove the 22-1 longshot Lumberjack Willie ($46.00) to an upset victory in the ninth race from the 10-hole. He also trains the 10-year-old gelding.

The Hawthorne meet is about a third of the way through its 2017 session and Matt is enjoying it and is optimistic it will turn out well for him.

“I’m starting to get people to notice me and beginning to get more driving chances’ said Matt who resides in Chrisman, Illinois “about 29 minutes south of Danville.” 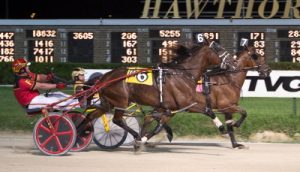 Hot Pace: The 6-5 favorite Hot Rod Dylan (Mike Oosting) had to work hard to hold off the late-charging Yankee Bounty (Jared Finn) and nail down his 12th victory of the year in the $12,500 Friday feature Open Pace for 4 and 5-year-old pacing males.

An early battle saw Hot Rod Dylan ($4.20) get command from Feelnlikearockstar (Tyler Shehan ) soon after the first quarter pole (27.4) with Evergreen Elite (Ridge Warren) parked from the get-go from the 10-hole right on his tail.

It took a quick 26.4 second quarter for Evergreen Elite to take over the lead with Hot Rod Dylan in the pocket however the 54.3 half took its toll on the leader in the lane and Evergreen Elite faded out of contention.

A second over trip put Yankee Bounty (10-1) right alongside Hot Rod Dylan at the three -quarters (1:23.1) but the Tom Simmons trainee couldn’t get past and dropped a scant nose decision to the Nelson Willis trained 5-year-old gelding at the end of the 1:51.1 mile. Kelly D (Mike Rogers) at 84-1 was third.

Still Perfect: Herman Wheeler’s Major Bliss (Bob Smolin), unraced until this season at the age of six, made it 6-for-6 in his delayed career with another win in the 12th race nightcap.