Homepage
You are here: Home1 / Mike Paradise2 / Bates Had Impact at Hawthorne Meet

The addition of Brandon Bates to the Hawthorne driver colony this year has been a winning situation for the Ohio native, Chicago Circuit trainers and their owners, along with the race track and its players.

The 32-year-old Bates has been among the leading drivers throughout the meet and rarely has a race gone postward that didn’t have Brandon in it.

And how does Brandon feel about his first winter meet at Hawthorne? 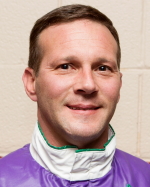 Brandon Bates . . . “had a great time,” driving at his first Hawthorne winter meeting.

“I’ve really enjoyed it,” he answered.  It’s been a pleasant experience for me. The people here have been very welcoming.  I got quite a few live mounts and seemed to be getting more every week. It’s been nothing but stellar.”

If Hawthorne applies for winter racing in 2019 and is granted dates by the Illinois Racing Board would Brandon return to the Chicago circuit next January?

“For sure I would come back for another winter meet at Hawthorne,” quipped Brandon. “I’ve had a great time.”

Bates had his breakout season as a driver in 2017 at Hoosier Park and is well on his way to another fruitful year.

In 2016 Brandon more than doubled his best season in dash winners with 155 and in money won with over $1.6 million, while driving almost exclusively at Hoosier Park.

As we head into the last five nights of the meeting, Bates is currently the third leading driver with 23 winners, trailing only defending champion Casey Leonard (34) and Sam Widger (28). Brandon is winning at a 17.2 per cent clip and has been.

The Loralee Johnson Stable’s Want Me is a two-time winner at Hawthorne with Brandon Bates at his lines. (Four FootedFotos)

Bates has been in the bike behind horses for three of the five top leading trainers at Hawthorne’s winter meet—Loralee Johnson, Tom Simmons and Nelson Willis. He drove horses for that trio of conditioners last year in Indiana as well.

Brandon stated, “Once I decided to come up to Hawthorne I made contact with some of the barns that would also be racing there. I’ve been fortunate to get first call on (trainer) Loralee Johnson’s horses. They told me before the meet, they would do their best to get me live mounts and they did. It’s been great driving horses for them.”

“I’ve been the second or third choice for Tom Simmons at Hoosier over the past 2 or 3 years,” said the Van Wert, Ohio native. “I had some opportunities to drive for him this winter at Hawthorne. I also was able to pick-up some new accounts for this meet.”

What or who steered Bates to the Chicago circuit for the winter?

“A good friend of mine, Dave Falzone (co-owner of pacing mare Backwoods Barbie), put a bit of pressure on me to come up to Hawthorne and give it a try. (Hawthorne’s) Tom Kelley and Jim Miller, were down at Hoosier one night last summer and they put in a good word about Hawthorne and suggested that maybe I should give it a try as well.”

“So I took the advice of all those guys and decided to give it a whirl and I’m glad I did. In the past I haven’t been doing a lot of driving in the winter. Very sparingly, like maybe one or two of my own horses. The last few years I’ve been getting young horses ready for wherever they have to go and maybe kept a couple for myself.”

Did Bates have to do any adapting to compete at Hawthorne?

“No not really, Brandon replied,  I have quite a bit of big track experience. Besides Indiana Downs (one mile) and Hoosier Park (seven-eighths), I’ve driven at mile tracks like Lexington and the Meadowlands.”

Thursday’s program starts off the last of this year’s winter racing dates at Hawthorne. A special Monday (President’s Day) card will conclude the meet. Harness racing will then resume at Hawthorne on Friday, May 4th.