Tonight’s second leg of the Bob Larry Late Closer series is one of these races where the betting favorite likely won’t be determined until just before the starting gate pulls away for the featured race.

Hawthorne’s morning line rarely has a luke-warm 7-2 favorite but it does for Saturday’s tenth race and this time it appears the USTA generated computer calculations is spot-on.

The Mike Brink stable’s Hart To Heart (Ridge Warren), two-for-two at the meet, is programmed at 7-2. Listed right behind the 4-year-old ICF pacer at 4-1 is Salvatore from the barn of Terry Leonard, a first-over winner two weeks ago who was locked-in before he stormed home with a very rapid 25.2 final quarter. 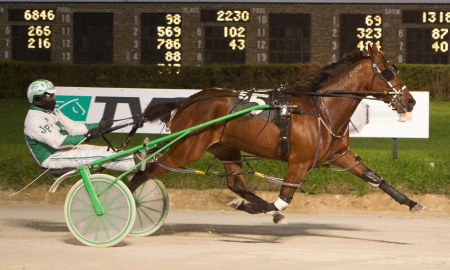 Then there’s Rock Steady Ron at 9-2, trained and driven by Jamaica Patton, an easy front-stepping winner in his first leg of the Bob Larry, pacing a 26.2 final panel on the end of his 1:55.2 mile for Illinois owners John Carver (Rock Island) and Ron Phillips (Athens).

Any one of this trio could be the betting favorite in the 10-horse field.

The 4-year-old Rockin Image gelding Rock Steady Ron can come up with some big miles at times. And for that matter, he can go off-stride on occasion as well.

“The horse doesn’t have any health issues but sometimes he interferes with himself and makes a break,” said Jamaica. “He doesn’t hit his knees. His problem is just below his knees, a tough area to work on. He wears knee spreaders and taping that area has helped.

“He always has been a fast horse with a big heart. My uncle Freddie (Patton Jr.) had the horse as a two-year-old and I’ve always like Rock Steady Ron. He’s fast and he tries hard. I had him n last year when he won in 52.”

Rock Steady Ron put all together a week ago. The horse had to work some to make the top, pacing a 28.3 first panel on a track listed “good. The 38-year-old Mississippi native was able to rate him nicely through softer middle quarters of 30.1 and 29.4 and Rock Steady Ron was full of pace for the stretch drive.

Also likely to get good play in the Bob Larry are Youmakemyheartsing (4-1, Kyle Wilfong), making his first appearance in the series, and Heza Real Diamond (5-1, Tyler Shehan), a 1:54 Hawthorne winner two weeks ago. 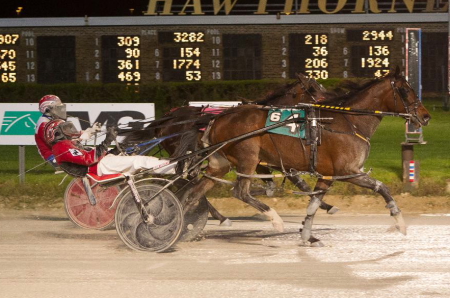 Wilfong had Bankin’ In You ($6.60) behind the 2-5 betting choice Lilly Von Shtupp and the Bret Wilfong home-bred trained filly zipped past to take the second leg of the Walter Paisley in 1:54.2 while the track was fast,

Three races later, after a downpour turned the surface to sloppy conditions for the second leg of the Dave Magee, Kyle’s two-hole trip with Fox Valley Hotcake ($14.40) paid off with a half-length victory over the prohibitive 2-5mfavorite Fox Valley Minka in 1:59.3 for her trainer Kim Roth.

There were no surprises in either of the two divisions of the Daryl Busse trot as the Kennedy Lindsey trained Lorhianon ($2.60) came thundering down the stretch to capture the first split in 1:57.3 and Trouble For All ($4.00) breezed on the front-end with a 2:03.2 mile on the rain-soaked track for driver and trainer Larry Lee Smith.