By Mike Paradise
Trainer Mike Brink will send out a pair of formidable trotters in Thursday’s featured “Winner Over” trot at Hawthorne who had had two different paths into the Springfield, IL conditioner’s barn..
The 9-year-old Rock Hollywood (Casey Leonard) was bred by Brink and an Illinois champion at two and three before being sold, raced in Europe and then returned home few years later.
Dominus Hanover is a well-bred 3-year-old who was a $60,000 yearling buy, raced for the Jimmy Takter Stable, then sold after his freshman campaign and put together a very successful 3-year-old campaign in Pennsylvania racing out of the barns of .New York based trainer Tom Milici at Yonkers and conditioner Amber Butler in Pennsylvania.
The Muscles Massive colt was plucked out of the recent Harrisburg Sale fort $22,000 by Brink for his Port St. Joe, Florida owner Larry Crawford and makes his local debut in the eighth race feature.
Dominus Hanover is the third foal of the Angus Hall broodmare Domello. Her first Lauderdale (1:53.4, $350,000-plus) was an $80,000 purchase and a recent winner at Yonkers. Her second Cubbitt (1:58.3) went for $120,000 as a yearling.
Dominus Hanover has been no worse than third in 16 starts out east, winning 9 races and placing another 7 times. The colt took two legs of the Bobby Weiss Series at Pocono back in April and captured two $20,000 Pennsylvania Sire Trotting Series, one in May and the other in June.. He’s made $103,700 this year. 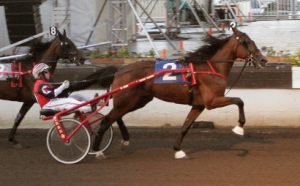 Rock Hollywood (Dave Magee) won the Springfield Chanpionship in 2009 and 2010 as a 2 and 3-year-old for trainer Mike Brink.

Rock Hollywood is by the Illinois stallion Psychic Spirit out of Brink’s Balanced Image broodmare Serafina The Great. The trotter made over $95,000 for Brink as a freshman and proved best in Balmoral Park’s $100,200 Lincoln Land Final and the $50,000 Springfield State Fair Championship with his mark of 1:54 flat.
.The big (about 17 hands) trotter made another $90,000-plus racing out of Brink’s barn as a 3-year-old and added another Springfield crown.
Brink sold Rock Hollywood at the start of August in 2009 for “an offer I couldn’t refuse” for a reported six figures to Norwegian owner Kjell Magne Andersen who hoped the horse would be his Hambletonian trotter.
That didn’t materialize. From 2011 through three starts in 2014 Rock Hollywood competed in Norwegian races where, quite frankly, he flopped through no fault of his own.
Rock Hollywood won only one race in 33 starts over various distances in excess a mile and a made only little over $20,000 mostly because he developed a bleeding problem and Norway doesn’t allow Lasix.
“I saw the horse wasn’t doing any good so I talked to his owner,” said Brink. “I asked him if he was interesting in bringing the horse back to me in Illinois where I’d put Rock Hollywood on Lasix and try to race him. He said: ‘I’ll tell you what I’ll do, I’ll fly him back and give you half of the horse and keep the other half’ and that is what he did.”
Rock Hollywood leaves Thursday night from the three-post in a seven-horse field with Casey Leonard while Brink will take Dominus Hanover away from the four-slot. They’re listed as the 5-2 and 3-1 co-favorites in my line and will race un-coupled as will the Ron Knupp owned and Kim Roth trained stable-mates It’saswan (pp 2, Matt Krueger) and Master Of Excuses (pp 7, Todd Warren).
She’s So Sassy (Kyle Husted), Jackie Goldstein (Pat Curtin) and Qua Uptown Boy (Frank Petrelli) complete the field of trotters.
http://harnessillinois.com/wp-content/uploads/2021/03/ihha_logo_white_wtext_v2-300x130.png 0 0 Mike Paradise http://harnessillinois.com/wp-content/uploads/2021/03/ihha_logo_white_wtext_v2-300x130.png Mike Paradise2016-08-04 12:45:382016-08-04 12:45:38Brink Doubles-Up in Trot Feature