By Mike Paradise
Four of the main championship stakes for 3-year-old ICF horses will be decided this week with the Violet and Cardinal finals for both trotters and pacers.
Thursday’s $21,7000 Cardinal trot championship will go as race six and a Race Office re-draw was kind to the Kenny Collier Stable’s Fear, a dominate eight length winner in last week’s elimination and Dygert Leg two champion Hail Caesar from the Mike Brink Stable.
Fear will leave from post two with Todd Warren who was at her lines a week ago and also in her 6 and 1/2 length romp on June 30 in his second leg of the Dygert colt stake. Fear originally had the 8-slot. 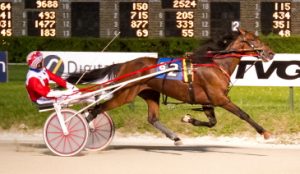