This weekend the Chicago harness racing circuit’s leading driver Casey Leonard will reach the 3,000 plateau in career wins, a lofty achievement for a horseman who didn’t begin his driving career in earnest until he was 32-year-old . . . and then only reluctantly.

The Harvard, Illinois native is from a family of successful horsemen. His grandfather, the late Bud Leonard, was an Illinois Harness Hall of Fame inductee. His father Terry is a long-time successful Illinois based trainer who drove in the Prairie State throughout the 1970’s and 80’s.

Casey went to work helping his dad at the family’s farm in Harvard after his Gary Leonard passed away. While his graduation from Western Illinois University pointed Casey in a different direction (Business Management), he enjoyed working with horses. 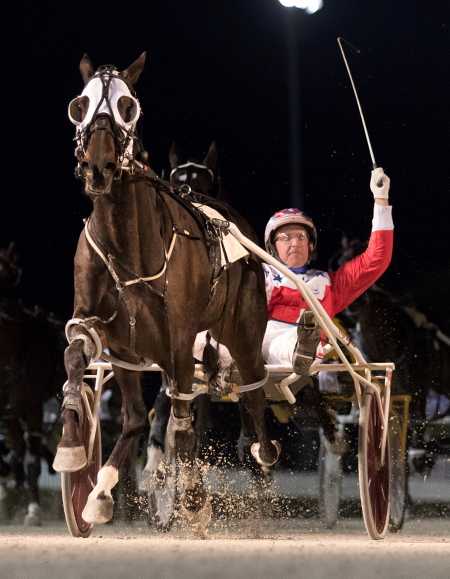 Casey Leonard is shown here celebrating one of his many driving victories. This one was behind the ICF star pacer Fox Valley Gemini, the winner of last night’s Open Pace with a lifetime best mile of 1:49.3. (Four Footed Fotos)

I remember a conversation with Casey at Maywood Park some 15 years ago. With so many of Illinois top drivers leaving the state for the “greener pastures” out east, Casey was “being asked by a number of trainers to drive their horses.”

Casey wanted to be home in the evenings with his family. However, the “money opportunities” driving horses was just too alluring, and eventually it caused him to have a change of heart.

Going into 2009, Casey had about 700 drives and a total of 79 pari-mutuel wins. Most of his earlier years driving horses were on the Illinois and Wisconsin fair circuits.

During the 2009 season Casey made the commitment to be a regular available catch-driver on the Chicago circuit. He ended up going to the gate 586 times that year and finished with 49 visits to a winner’s circle.

Horses Casey has driven have earned over $1 million for the last ten years and that includes last season’s Covid shortened campaign when he had only 600 occasions to go postward.

Casey has been Hawthorne’s leading driver for the last seven seasons. His best year was on the circuit was in 2013 (413 winning drives) when the now defunct Balmoral and Maywood Parks were providing year around racing dates.

“I’m obviously happy to have driven 3,000 winners”, said Casey. “I just wish I had more opportunities,” a response no doubt shared by every Illinois horseman.

With Arlington Park putting up the “For Sale” sign, it appears both thoroughbreds and Standardrbeds will have to share Hawthorne Racecourse, the lone Chicago area facility still willing to conduct horse racing in northern Illinois.

Opportunities for our Illinois horsemen will be, at best, on a limited basis.

They deserve much more.

Fox Valley Gemini was motored out of the nine-slot and Kyle Wilfong did the same from the 10-hole with He’zzz A Wise Sky. Bobcat Bay (Ridge Warren) pushed the early pace from the pole position and settled in third.

He’zzz A Wise Sky, three-wide in the first turn, hit the quarter mile pole in a quick :27.1, with Fox Valley Gemini in the pocket. He’zzz A Wise Sky proceeded to pace his fifth consecutive sub 55 half (54.4) with his rival right behind him.

In the lane “Gemini” had more in the tank, powering past He’zzz A Wise Sky in deep stretch. Bobcat Bay, given a heady three-hole trip by Ridge Warried, came on strong to edge the even-money favorite for second.

The victory was the 43rd in 67 lifetime starts for the six-year-old Yankee Skyscraper gelding owned by Jim Ballinger of Atwater, Illinois.