Homepage
You are here: Home1 / Mike Paradise2 / Casey has Some Kinda Night

Casey Leonard had the hot hand when the second legs of the Late Closer Series events for fillies and mares were decided Friday night at Hawthorne. The Harvard, Illinois native had five winning drives and four came in Series events.

One of Casey’s surprise winners came in the series division for fillies and mares without two wins or $20,000 in earnings when Little Miss Torrie popped at 27-1 and paid $57.20. The four-year-old mare is owned and trained by Herman Wheeler. (Picture courtesy of Four Footed Photo) 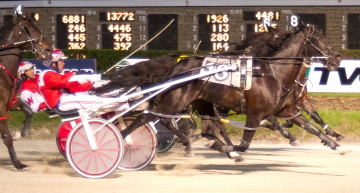 Casey also won with Jiggles The Clown ($3.00) for the Roger Welch trainee in a NW of 2 event and with the Leonard Stable’s Financial Effort in a conditioned pace.

Casey got nosed out of a sixth winner when his Tamarac Smoochie dropped a close photok decision to Duneside Perttie (1:56.4 Kyle Wilfong) in a division of the NW of 4 series.

In other Series action Peter Karras’ Fox Valley Charm put on a wicked move in the last three eighths of the mile to power her way to a victory in the $14,000 headliner for distaffers with winnings over $1,000 per start on 2015-16.

Patiently driven by Matt Krueger, the Dirk Simpson trainee was ninth and last midway through the last turn when Krueger got the 4-year-old Illinois bred filly into high gear, going four-wide while gobbling up ground and ending up with a rather easy win with a 1:52.4 mile.

Fox Valley Charm had been racing in Pennsylvania for her Sherman, Illinois owner before taking the long van ride back to her home state with this series high on her summer agenda.

Likeafireballshot (Jared Finn) picked up her first win of the in a NW of 2 series split for trainer J D Finn, a half-length ahead of Bucklegirl Bobette (Casey Leonard).

More on Saturday: Pacers Ontario Success, Southwind Scorpion and Sunset Dreams all have a couple of things in common as they compete in round two tonight of Late Closer Series: They like racing at Hawthorne and they’ve already wrapped up a starting berth in their respective finals.

The Roger Welch trained Ontario Success was a lock to be in next week’s $15,000 Final for winner’s over $1,000 per start in 2015-16 when only seven horses challenged him in the first leg and just six tonight.

After dominating Hawthorne’s winter Opens the 6-year-old got some rest and came out last week after his three month layoff with a dominating four-length triumph in 1:51.4 and was well in hand to driver Casey Leonard.

I’ve got him as the overwhelming 3-5 favorite in race four tonight although he’ll likely go off at 1-5 or maybe even 1-9. 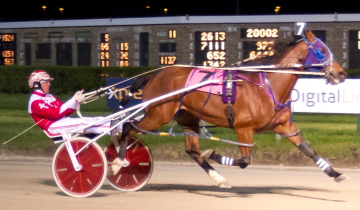 On the other hand both Sunset Dreamer and Southwind Scorpion (Four Footed Photo) had their work cut out to make the $12,000 final for pacers with earning less than $1,000 per start. 17 hors4es entered in round one two divisions were needed and neither horse was the post time favorite.

Both won in come-from-behind fashion, Sunset Dreamer in 1:53.4 with Kyle Wilfong and Southwind Scorpion in 1:53 flat with Matt Krueger.

Sunset Dreamer didn’t get a purse check in four tries in Indiana for trainer Bob Rittoff However the horse has been a terror at Hawthorne. In seven starts on its big track he’s won four times and was disqualified from first out of another.

Meanwhile Southwind Scorpion (2-1 in my line) did well at Hoosier, earning over $7,000 there in four starts for owner and trainer Vince Affrunti Lockport, IL. The 5-year-old gelding returned to Hawthorne and its longer stretch last week and added $5,000 more when he zipped past his series field drew off with a 27.1 last panel.