By Mike Paradise
When Casey Leonard drives his initial horse at the upcoming Hawthorne meeting it will be the 39-year-old Illinois native’s first time in the bike in a pari-mutuel race this year. In fact, Casey hasn’t driven since closing night last September 25th, seven long months ago.  And while he is “looking forward to the start of Hawthorne,” driving horses is now a “hobby” for the Chicago circuit’s leading pilot after seven-plus years of making a living, and often a very good one, as an Illinois harness racing horseman.

“With the steady decline of racing dates in Illinois and the uncertainly of harness racing in our state I decided to look for another job to support my family,” said Casey. I‘ve been fortunate to find one, at a very good company, and I’ll still be able to drive horses at Hawthorne only this time as a hobby, not as my livelihood.  I drove at Hawthorne on its last Sunday of racing. I interviewed for the job on Tuesday and I started at the DeLong Company on Thursday, I think the date was October 5th.

(Still headquartered in Clinton, Wisconsin, the more than 100-year-old DeLong Company currently operates 24 facilities and offices in Wisconsin, Illinois, Florida, Kansas, Nebraska, New Jersey, New York and Ohio. The DeLong Co. is the No.1 U.S. exporter of containerized agricultural distributions.  It is comprised of five divisions of agricultural sales and service: agronomy, grain, seed, wholesale distribution and transportation. The DeLong Co., Inc. remains a family owned and managed organization. Its current board of directors is 4th generation and its shareholders are 4th, 5th and 6th generation direct descendants of its founder William E. DeLong). 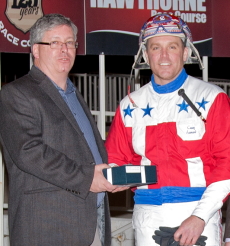 Casey stated, “It didn’t look like anything was going to happen (legislation-wise) in Illinois and if it did, it still would be a couple of years before it impacted the horse racing industry.  It’s a real good opportunity for me working for a well-respected company. They tell me it’ll take a couple of years before I get my feet under me and really understand the business and I would agree with that. There’s a lot to learn. I’m trying to become a Grain Merchandiser at the company.

As far as horses, the only thing I’ve been doing with them is training some of my own on Saturdays. My dad (Terry) is still running the farm (in Harvard, IL). One of our employees has moved to Indiana to help (brother) Ross with horses at Hoosier.”

The DeLong Company  located across the Wisconsin border,  is about 20 miles from Casey’s home in Harvard, Illinois  “It’s sure a lot better drive for me than the commute I used to have going to Balmoral, said Casey laughing. That was an 110 mile journey and about 2 and 1/ 2 hours when the traffic was light.  Once Hawthorne starts there’s going to be a lot on my plate to do both, for the next five months. Driving horses is now a hobby and most people can’t rely on a hobby to make a living. That’s why I decided it was time to do something else.”

Casey didn’t become a full-time Chicago circuit driver until September of 2009 when he was 32-years-old. Nevertheless, he quickly rose to become one of  Illinois’ best. He had only 32 winning drives from 1996 through 2009 but an impressive total of 2,001 since. His best year was in 2013, when he posted career highs of 407 dash winners, while horses he drove  won over $2.8 million.  On the other hand, Casey has gone from 2,517 drives in 2013 to only 1,119 in 2016, despite having a career best UDRS of .365 last year. His money won total tumbled by $1.4 million since 2013 with the huge drop in Illinois racing dates and without a 2017 Hawthorne winter meet, it’ll take another nosedive this year.

Casey said, “I talked to someone from Hawthorne the other day who was bragging about how good their purse structure is for this year. I’m from the Dave McCaffrey school of thought: Damn it, they should be good when you’re racing only five months instead of nine.”  Casey certainly has a valid point, doesn’t he?

Qualifying Update: Qualifier races slated for today (Friday) at Springfield were canceled because of wet conditions and have been rescheduled for Wednesday, May 3rd.
Hawthorne will host pre-meeting qualifiers on Friday, May 5th, and again on Monday, May 8th beginning at 10:00 am both days. Entries for the May 5th qualifiers will be taken on Thursday, May 4th. Entries for the Monday, May 8th qualifiers are taken on Sunday, May 7th.

During the racing season, qualifiers will take place prior to the regular racing program on Thursday evenings. Qualifier horses will paddock in Barn 1 on the Hawthorne backstretch.