Bob Groter has passed away. Click here for more. https://www.legacy.com/us/obituaries/name/robert-groter-obituary?id=40590060

There are few out-and-out “locks” in harness racing however when it came to naming the 2022 Illinois Pacing Sire of the Year it looked to be “slam dunk” decision last month for USTA District 5 member voters.

They awarded the honor to the Fox Valley Standardbred’s sire Somestarsomewhere, producer of an outstanding first crop of state-bred freshmen including both the ICF two-year-old colt pacer of the year Fox Valley Langley (1:52.0, $57,480) and the freshman Illinois bred filly pacer of 2022 Fox Valley Kia (1:51.2, $131,052).

The Jamaica Patton trained Fox Valley Langley never missed a purse check in 11 season starts and came away with seven first place finishes including a Cardinal stake division victory and the fall’s Incredible Finale Consolation at Hawthorne, along with a pair of runner-up state-bred stake efforts.

Fox Valley Kia was no worse than second in her last nine first season starts, winning seven of 13 times going to the gate for either trainer Phil Knox or Dan Nance. The filly came up strong at the right times, taking the $185,000 Incredible Finale showdown last fall on Hawthorne’s Night of Champions. Earlier “Kia” nailed down the Springfield State Fair freshman filly pacing championship. 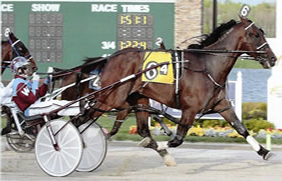 Fox Valley Standardbred’s Somestarsomewhere was named the 2022 Illinois Pacing Sire of the Year.

There was a wealth of other Illinois stake winners sired by Somestarsomewhere that came away with significant championships as well in their first season of racing.

Somestarsomewhere is by Somebeachsomewhere out of the Art Major mare Lovely Assistant and stands at Fox Valley Standardbred with a $4,000 stud fee.

Somestarsomewhere was originally a $110,000 yearling buy for the Ron Burke stable at the 2011 Harrisburg Sale. He went on to become first two-year-old colt pacer to go a sub 1:50 mile when he won his Breeders Crown elimination at Pocono Downs in 1:49.4.

At the end of his three-year-old campaign the horse was bought by veteran Springfield based trainer Tom Simmons for Clinard Properties for $90,000 at the 2013 January Meadowlands Sale.

Somestarsomewhere made over $200,000 in four seasons of racing for the Simmons stable before being acquired in January of 2019 by Walker Standardbreds of Sherman, IL

When Simmons bought Somestarsomewhere he said he did so because “Dave (Clinard) wanted another good horse and hopefully he’ll have it in Somestarsomewhere.”  Simmons also pointed out at the time that he thought the horse “could go on to be a good Illinois stallion.”

Simmons certainly hit the bullseye on that assertion.

The stake schedule for 2023 has been finalized. We anticipate going for similar amounts as 2022. Click here for details and nominating forms. 2023 ICF LC & CV Schedule, 2023 NOC Conditions and Schedule. Schedules for racing at the Springfield, DuQuoin and County Fairs will be announced soon.

Paul Everett passed away early in the morning on January 1. Although he had lived with Parkinson’s, multiple myeloma, and heart disease for years, his death was quick and unexpected. He was an extraordinary person – a musician, a maker, a preacher, an engineer, a thinker, and an enthusiastic pursuer of whimsy. He experienced wonder easily, and fell in love with all manner of ideas, artists, folk music, and games; his passions were sufficiently interesting and infectious that he gathered communities around himself. He was loved by many. Please join us on January 14th, 1pm, to remember him and celebrate his life. You can join us in person at 29 Grant Ave n Endicott, NY, or via livestream at Living Hope Church, Endicott New York

We are sad to hear that longtime Illinois harness horsemen Bruce Krause has passed away.

Steve Wagoner has passed away. Click here for more. https://www.edwardsfh.net/obituaries/steve-wagoner

Out of an abundance of caution Manzanola Feeds is voluntarily recalling certain lots of Top of the Rockies Alfalfa Cubes because it has the potential to be contaminated with Clostridium botulinum, an organism that can cause severe and potentially fatal toxicity in animals eating the contaminated food or coming into contact with contact areas that have been exposed to the product. Common symptoms may include dizziness, blurred or double vision, trouble with vocalizing or swallowing, difficulty breathing, muscle weakness, abdominal distension, and constipation. Animals experiencing these symptoms should receive immediate medical attention.

The recalled product was distributed directly to the following states: AR, CO, IL, KS, LA, MO, NM, OK, TX, WI. Further distribution may be possible, so it is important to check if you have this product.