It was young ladies’ night out and they got the attention at Hawthorne Saturday evening when the Illinois Department of Agriculture rolled out five Violet stake races for both Standardbred gaits.

Jamaica had El Brae Brae in command to a soft first quarter (31 seconds) and relished the lead to Trotamileinmyshoes (Richard S Finn) when they hit the half in a modest 1:02.3. El Brae Brae came out in the last turn, took over the lead, and went on to hold off the 6-5 favorite Dawn Of Creation (Casey Leonard) and the third place finisher She’spertifulikepert (Travis Seekman) by three parts of a length.

No Mystery Here: The second Cardinal grouping was “no contest” when there were no challengers to the front stepping 1-5 favorite Marvelous Mystery, trained by her driver Curt Gurmmel 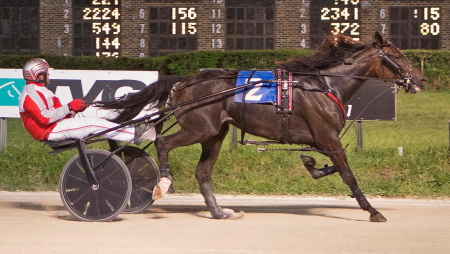 Marvelous Mystery, driven by her trainer Curt Grummel, was much the best in her division of last night’s Violet Trot. (Four Footed Fotos)

Grummel put Marvelous Mystery on the front end right from the get-go, cruised to s 1:02.2 half, and pulled away in the lane to win by nine widening lengths in 2:01 flat.

Marvelous Mystery, now four-for-four in the first season, is owned by Curt, Craig and Leo Grummel of Carrollton, Illinois.

Easy Does It: The Violet pace was split into a trio of $17,150 divisions with the initial split a “walk in the park” for the overwhelming 1-9 public’s choice One R Andis Star, nicely rated by Kyle Wilfong for trainer Nick Prather.

Wilfong took One R Andis Star ($2.20) out of fourth at the quarter mile pole (30.3) and in a flash the Sometartsomewhere offspring was on top. An easy 1:00 half-mile time was all One R Andis Star needed, pulling away by almost six lengths in 1:56 flat for One R Standardbred of Rushville, Illinois. 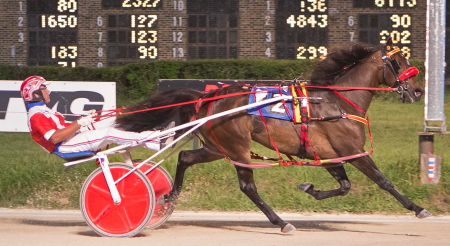 My Daddys Revenge and driver Casey Leonard were all alone at the finish of last night’s third $17,150 Violet Pace division. (Four Footed Fotos)

Another Romp: When unbeaten Senorita Mouse was a late scratch, the betting public hammered My Daddys Revenge (Casey Leonard) down to 1 to 9 odds and the Mike Brink freshman didn’t disappoint her many supporters, capturing the second $17,150 Violet pace division by nearly eight lengths in 1:57.1.

Casey had the public’s choice in fourth in the early going but on the move before the half, getting there in 59.4. The Mike Brick trained youngster had plenty left in the tank, winning for fun over runner-up Roan By Design (Travis Seekman).

Epic Skirmish: The last Cardinal pace division was the best battle of the night.

With longshots going out hard for the lead both favorites The Magical Woman Atlee Bender) and Fillys Revenge (Kyle Wilfong) were taken back at the start.

Fillys Revenge moved first, going three-wide after a 28.3 first quarter to take over the lead. Soon after The Magical Woman made her own thee-wide move and eventually got alongside Fillys Revenge. They fought the rest of the way with Magical Woman ($3.20) prevailed by three quarters of a length in 1:56.4. The 20-1 longshot Rona Mae (Phil Knox) came on well to finish second.

Prep Favorites Prevail:  In last night’s opener, the Tony Maurello Memorial prep for state-bred fillies and mares, three and up, Fox Valley Exploit held on at significant 1 to 5 odds, gaining a nose decision over the late rushing Rollin Coal (Juan Franco). The pair covered the mile in 1:52.3.

Driver Kyle Husted used a pocket trip to gain the victory, taking command in the stretch with the five-year-old Sportsmaster mare, and was all out to win it. Scorecard Dandy came (Kyle Wilfong) came up with a game effort for third place money of the $12,000 purse.

The Carl Becker Memorial prep turned out to be a little more than a training mile for the heavy favorite Annas Lucky Star ($2.40) who won under wraps for driver Kyle Wilfong by five lengths.

The Danny Graham (Salem, IL) and Nelson Willis trained Queen of the Illinois mares, grabbed an early lead, coasted to a slow 59.2 half, and showed her heels to the field the rest of the way, coming home 27 seconds flat for her 50th career victory. The now eight-year-old mare has $529,001 in career earnings.

That’s 10-for-10:: With a bevy of “chalks” winning last night I thought your author select nine straight winners on top, failing only with a third-place finish in the tenth race. A reader pointed out that I had the tenth race winner on top in my line and comments and it was my “price shot” that finished third.” So I was 10-for-10.