Homepage
You are here: Home1 / Mike Paradise2 / “Coal” Heats Up at Hawthorne

The Friday spotlight will be turned on the $15,000 Open Pace with a solid evenly-matched field of eight horses slugging it out in an early event on the 12-race program.

Unless the weatherman delivers an unexpected forecast there should be plenty of sunshine when the second race starters go to the starting gate with a scheduled post time of 7:30 pm.

There’s really no-clear cut early favorite. You could probably make a case for most of the Open pacers in the field to end up in the winner’s circle.

One of the possible favorites is the Jim Ellison Stable’s Coal Hanover who is now in his season’s best form. The 5-year-old son of Dragon Again has uncorked a pair of wicked last quarters—26.2 and 26.1 in his last pair of winning outings—and will have last week’s driver Jim Lackey at his lines again.

Tonight’s race marks only the second occasion this year that Coal Hanover has had the same driver in back-to-back starts. The previous time was when Trace Tetrick drove him to a win and a second place finish back in mid-April at Hoosier Park

In his 10 starts this year Coal Hanover has had eight different drivers in the bike behind him. 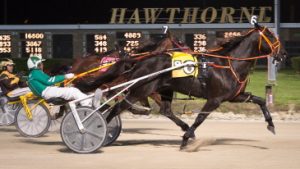 Coal Hanover is shown winning last week’s $15,000 Open Pace with Jim Lackey who is back at his lines Friday night. (Four Footed Photo)

While Coal Hanover has shown plenty of versatility on the racetrack chalking up nine victories over the last season and half, often against top level horses, I asked his trainer Jim Ellison if he would be surprised to learn that his horse has won only one of those races on the front-end.

“Yeah,” answered Ellison. “I didn’t know that but the horse prefers to chase horses. He doesn’t like to do the work on the front. Sometimes he tries to get away with some easy fractions. ‘Coal’ would rather chase than be the horse being chased.  He’s sharp right now and he’ll have to be because this is a nice field he’ll be facing. I can assure you that he’ll be coming off the pace in Friday’s race. I’m hoping for some fast early fractions (by others). He’s just going to have to try and get up in time. It’s probably going to take something like a 26 last quarter to get past.  We gave ‘Coal’ a good rest over the winter. He’s best on a big track so we wanted to have him sharp for big tracks like Hawthorne and Hoosier. We raced him earlier in the year in Ohio but he’s not as good on a smaller track.”

Actually Coal Hanover has been best at Hawthorne. He’s 2 for 3 at this meeting and was a close second in the other when he raced on the front-end and was caught in the late going. In 2017 the horse is 1 for 7 in Indiana.

Last year Coal Hanover won six races, going 2 for 8 at Hawthorne and 2 for 19 at Hoosier. The pacer’s other two victories came in Ohio.

Hot Rod Dylan swept the recent Bob Larry Series but he does take a substantial class hike tonight, meeting much better pacers in his search for season win No. 11.