Four more Illinois State Fair championships will be decided Saturday night, all for ICF fillies and mares of both gaits. After last weekend’s preps and eliminations the stake that figures to get the most interest is the two-year-old filly pace.

The division leader Connie On The Go, a heavy favorite in last week’s prep, not only got beat by Princess Mooss, but the star of the Jamaica Patton stable also finished tenth and last, and was distanced.

The obvious question to her trainer was: Is “Connie” all right?

“She’s fine,” answered Jamaica. “She got a little “steppy” in the turns last week. She’s good for Saturday. She also had a couple of small issues that had to be taken care of and we did just that.”

The homebred’s filly’s past performance line said she “stopped” in the lane.

“She didn’t stop,” replied the 39-year-old Mississippi native. “Ridge (driver Warren) did the right thing and pulled her up when she was out of contention. He saved her for another day. She’ll be fine for the stake.”

Connie On The Go came into last weekend’s prep on a five race winning streak that included two legs of the Incredible Tillie, the Violet, and a division of the Downstate Classic but last Saturday belonged to the Gary Rath stable’s Princess Moose who nailed down her maiden victory for Berwyn, Illinois owner Al Beals.

Princess Moose drew the four-slot in the fourth race $32,000 State Fair championship for her regular drive Kyle Wilfong while Connie On The Go has the six with Ridge Warren back at her lines. 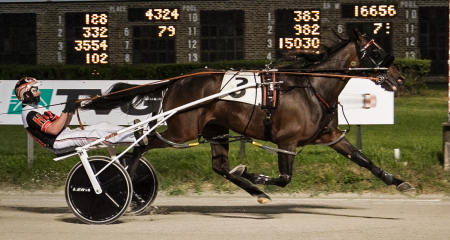 Great Way to Start: Tonight’s opener brings out a field of nine state-bred freshman filly trotters going for the $16,000 winner’s share of a $32,000 purse.

The Steve Searle stable’s Loulita raced with trotting hobbles for the first time in her elimination and drew off by almost five lengths for her new driver Casey Leonard. Starting from the two-slot a second straight week only helps her chances of a repeat victory.

Other major threats is the improving Lucky Valarie (Travis Seekman) who moves in a few slots for trainer Gerald Hansen and Lous Voodoo Woman (Kyle Wilfong), already a seven-time freshman season winner and one of three Searle trainees in the race.

“Exploit’s” streak began last September when she won the Incredible Tillie final Hawthorne’s the Night of Champions. The Sportsmaster filly is four-for-four this year, all in ICF stake competition.

Crabby but Good: The fourth State Fair Championship tonight is the three-year-old filly trot that will go as event 10 the 14 race card. It also carries a $32,000 purse.

Lous Abigail, another top-notch trotter from the barn of trainer Steve Searle, will no doubt be sent off as the public’s choice after a dominating six-plus length victory in her elimination, a 1:58.2 clocking under a hold by driver Casey Leonard.

The Lous Legacy filly has finished worse than third only once in 17 career starts and she brings an attractive $123,781 bankroll into tonight’s contest for her owners and breeders, the Flacco Family Farms of Alexis, Illinois 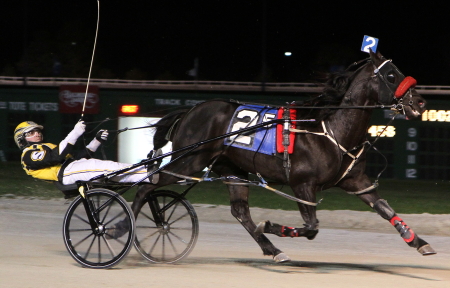 Looks Who’s Back: Making his return to Illinois tonight at the age of eleven is Al’s Hammered, one of the top ICF pacers of the last decade and a one-time 1:48.4 winning Super Night pacer.

Driver Bobby Smolin acquired the former state-bred standout earlier this month and the gelding’s next win will be his 50th of a brilliant career that has seen him earn over $615,000 and bring Smolin a Super Night victory (1:48.4) as a three-year-old in Balmoral’s 2012 Langley Memorial while under the care of trainer Bob Phillips.

Al’s Hammered and Smolin teamed up to win a second Super Night stake two years later as a five-year-old with a 1:49.2 clocking in the Tony Maurello stake.

Like Old Times: It didn’t take long for the former Chicago circuit driver Marcus Miller to visit a winner’s circle in his home state. It came in his first drive back.

The now 31-year-old Illinois found racing room in the late going with Well Basically ($3.60) and the 4-5 favorite responded with a three-quarter of a length victory in the $32,000 Illinois State Fair championship for two-year-old pacing colts and geldings.

The 1:56.4 victory was the third in a row for Well Basically, trained by Marcus’ father Erv Miller and owned by Illinoisans Anthony Lombardi (Morris) and the Marty Engel Stable (Northbrook).

Diamond Diesel edged out the pace-setting Frontier Charley for second.

Much the Best: One race later Bobalou left no doubt he is currently the best of the Illinois juvenile male trot division with his fifth consecutive win, this one by a nine widening lengths in a career fastest time of 2:01.1.

Trainer Curt Grummel was in the sulky again for Bobalou, a Lou’s Legacy owned by his breeder Dr. Patrick Graham of Pittsfield, Illinois.

The 55-1 longshot Loyz Say When, catch-driven by Marcus Miller, was a distant second. Fistfullofdollars was third best in the $32,000 ICF juvenile trotting final.

Sweet Revenge: The prohibitive 1-5 favorite He’zzz A Wise Sky (Bobby Smolin) avenged his loss in last week’s three-year-old pacing prep in a big way, drawing off to more than a five length triumph in 1:52.1, a new mark for the Don Filomeno owned and trained colt.

Owned by the duo of Brink (Springfield) and All-Wright Racing (Morton), On Higher Ground was sent off at 10-1 and paid $22.40