. . . The first Chicago circuit race facility to handle over $2 million on-track was at Hawthorne at its 1974 winter meet, when it did $2,018,873 on the Saturday afternoon March 15th program that year. In 1985 Hawthorne established its all-time single program handle when $2,430,466 was bet on the Saturday, February 17th daytime card.

. . . Heading into 1979 the $2 million handle plateau on a single Illinois Standardbred program was reached only three times, twice at Sportsman’s Park and once at Hawthorne.

Nevertheless, in 1979 the $2 million on-track handle figure was surpassed an astonishing 14 times that year at Sportsman’s Park. Their July 5th Friday program and their Saturday July 6th cards combined for a new Illinois record weekend total of $4,216,646 bet, all without in-state betting parlors and out-of-state wagering facilities. 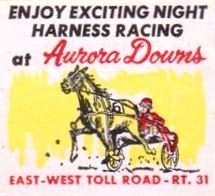 The Arlington Park (Arlington Heights), also, held a brief two-year meet in the late 70’s on its mile and one-eighth oval. 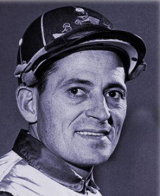 . . . Hawthorne’s first harness meeting was in 1970 and the initial Suburban Downs session had an average handle of $1,009,777 and an average nightly attendance of 11,686. The highest on-track handle for Hawthorne’s first season came on May 3rd that year when $1,302,503 was wagered on a single Saturday program.

. . . Bob Farrington, a National Hall of Fame inductee in 1980, was Hawthorne’s first leading driver.  Also, in 1970 Farrington was atop the final driver standings at Sportsman’s Park and Washington Park. Phil Milburn posted the most winning drives that year at Maywood Park.

From 1964 through 1970 Farrington would log a record 16 driving titles on the Chicago Cook County Circuit with six each at Sportsman’s and Washington Parks, two at Maywood and one at Hawthorne.

. . . ,Nevertheless, when it comes to the all-time Chicago circuit attendance record for a single program it’s Washington Park by a landslide. A hard-to-believe total of 30,222 customers poured through its turnstiles for Washington’s very first harness racing program on September 3, 1962.

Washington Park held harness racing meets from 1962 through 1976 on its one mile oval until a massive fire burned the mostly wooden structure to the ground. The facility was located in Homewood, IL, a near to the city south side suburb, and easily accesible by public transportation.

. . . In 1979 for the first time the Sportsman’s Park summer harness racing meeting out-handled and out-drew the thoroughbred meet at Arlington Park.   The daily average handle for Sportsman’s was a new state record of $1,627,639, about $5,000 higher daily than Arlington’s. The average attendance at the Sportsman’s Standardbred meeting was 13,136, over 2,000 daily more than the thoroughbreds.

Sportsman’s in-town facility location, on Cicero Avenue, a heavily traffic thoroughfare, that stretched from the north side of the city to the far south side, was just across the street from the Chicago city limits and that played a big role that year when it surpassed Arlington Park, positioned some 25 miles northwest of the city.

Long lines of cars at gasoline stations were the norm in 1979 caused by a significant decrease of oil output in the wake of the Iranian Revolution. The price of crude oil nationally nearly doubled that year.

. . . On November 19, 1978, a raging fire destroyed Hawthorne’s Grandstand and heavily damaged its Clubhouse. Its 1979 racing was moved to its next-door neighbor Sportsman’s Park. Hawthorne was rebuilt and the racetrack was reopened in September of 1980 for its thoroughbred meet.

. . . Maywood Park’s all-time payoff for a two dollar wager came on December 8, 1985 on its “Super Bet.” On three consecutive races, a winning Super Bet ticket had to have the correct Exacta in one race, the right Exacta in the next, and the accurate Trifecta numbers on the third race of the wager.