After a five week absence the Chicago circuit’s Open for strictly filly and mare pacers returns Saturday evening where it will share top billing with a rare Hawthorne 10-horse field Open Trot.

The top older gals at the meet will slug it out early on the card with their six-horse field going as the second race. The trot, stocked with horses that do their best racing on or close to the front, is race eight on the 10-event program. Both Opens have a $13,500 purse on the line. 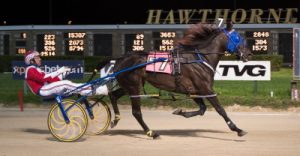 The 8-5 morning line favorite OK Heavenly is enjoying another very productive season of racing. The Angie Coleman trained filly is an eight-time season winner with four of those victories coming earlier in the year at Pompano Park and the other four in Hawthorne Opens with tonight’s driver Casey Leonard at her lines.

However, Ok Heavenly does come off back-to-back disappointing outings. She was a non-threatening fifth in an Open II event at Hawthorne two weeks ago where she faced some colts and geldings and was the victim of a less-than-desirable trip when she was parked out to a 55.1 first half at Hoosier and was beaten some 14-plus lengths in her first August start.

Meanwhile the Jim Ellison Stable’s Vintage Babe (5-2, Jim Lackey) has hit the board in all of her last five starts, including a trio of second place finishes in her most recent races. The 4-year-old Vintage Master mare captured a Hawthorne Open on July 15.

Vintage Babe raced out east before she was bought in late May by her Illinois owners where the mare was the first place finisher in a $20,000 leg of the Petticoat Series at Yonkers back in March. 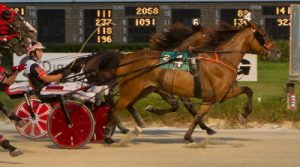 Take Your Pick:Trainer Angie Coleman also sends out the 2-1 programmed choice in the eighth race Open Trot. Banker Volo came to her barn in time for Hawthorne’s July 30 Open and extended his winning streak to five in a row for Grinnell, Iowa owner Daniel Roland.

Banker Volo then made an unsuccessful venture into the Invite ranks at Hoosier Park. The eight-year-old trotter returned to Hawthorne for last week’s Open, hammered down to 1 to 5 odds, but was passed in the late going by the winner Big Expense (Kyle Husted) and runner-up Pridecrest (Jared Finn).

Banker Volo ended-up the 10-hole. Big Expense is to his left with the nine and Pridecrest didn’t fare much better with the eight-post. Both Banker Volo and Big Expense do their best racing up-close and the same can be said for the trotters Skyway Jaylo (Larry Smith) and Primed N Powerful (Freddie Patton Jr.) who landed the one and two slots, respectively.

Chalk Up Another: Sent off at even-money by the betting public, thee Mike Brink Stale’s Tookadiveoffdipper (Mike Oosting) didn’t disappoint his many supporters the Friday’s $11,000 Open II Pace with a front-stepping victory in 1:52.2.

Oosting took Tookadiveoffdipper out of third in the first turn, grabbed the lead after a 28 first quarter, and was never headed in the seventh race feature for his eighth win in 10 season starts. Trashytonguetalker rallied strongly to be second, beaten three-quarters of a length, and Coal Hanover was third best.

Du Quoin Draw Sunday: Entries for the Wednesday, August 30 racing program at the Du Quoin State Fair are due by 10 am tomorrow (Sunday morning.). Trainers are encouraged to use online entering for Du Quoin. Phone entries will be accepted at Hawthorne (708-780-3690.).