Its front and center stage for this year’s crop of ICF freshman trotters when the $22,350 Violet for fillies and the $19,750 Cardinal for colts and geldings share the Sunday spotlight.

It’s early July so many of the 2-year-olds competing in the two Illinois conceived and foaled trots are in their second or third pari-mutuel start.

It’s the time of the year when hopes are high for all the owners and trainers of the Violet and Cardinal participants. As the summer goes on we’ll find out which of these youngsters will emerge in their respective divisions as the major players. For now, it’s still a guessing game as to who will prevail in the first major test in the state-bred freshman trotting divisions.

Trainer John D Finn has two prime contenders in the Cardinal showdown. Cruzen Cassi, who drew a bye into the final after notching Hawthorne’s $12,000 Kadabra stake series on June 18 with Jared Finn in the bike, and MT Erie Mafia, a game 2:01.2 winner a week ago in his Cardinal elimination, also with the 30-year-old Jared driving.

I asked J D on Thursday which trotter his son will drive in the final and he replied with a laugh: “I don’t know, he won’t tell me.”

The next morning (Friday) Jared made the decision to drive Cruzen Cassi, the 9-5 morning line favorite, so his dad will be on the outside looking in with the youngster Mt. Erie Mafia from the nine-slot.

“Cruzen Cassi is a smaller horse than Mt Erie Mafia. Both horses trained down nicely with no problems,” said the veteran Finn. “I think we were a little surprised just how well Cruzen Cassi finished in his first start.”

Cruzen Cassi, a son of Cassis out of the Super Bowl broodmare Registered Nurse owned by Illinoisans James Rine and Charles Doehring, both of Brownstown, came home in 28.4 in his 2:03 flat win in the Kadabra. 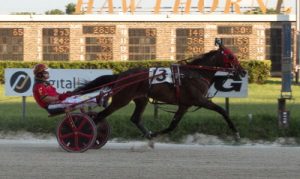 “Two of the horse’s owners (Fitch and Atteberry) never owned a horse before so they were very excited when their trotter won his first start and it came in an ICF stake.”

With the move from the three-slot to the outside nine-hole, the obvious question to JD was: “Does Mt Erie Mafia have good gate speed?”

“I don’t know,” answered JD. “We never asked the horse to leave hard training him.”

Despite the 9-5 morning line odds Cruzen Cassi isn’t a shoo-in to capture the Cardinal. After all, it’s only the youngster’s second career start and his competition tonight looks formidable.

For instance, there’s True Detective (Casey Leonard), who dropped a head decision to him in the Kadabra and now gets a very beneficial post shift tonight going from the eight-slot to the rail.

Stable-mate Mt Erie Mafia looked very good in his Cardinal elim victory and the Mike Brink Stable’s Vic’s Pizza could be a major threat if he stays flat this time. Bet down to 4-5 odds the younger brother of Fox Valley Veto and Fox Valley Yoko went off stride at the start, was more than 20 lengths behind the leader at the first quarter and made up 14 lengths to finish fourth, beaten about six lengths.

The Brink Stable’s Maui Mama (Casey Leonard) is the 8-5 first flash favorite in the Violet Final and her 28 flat last quarter saw her pull away by three lengths at the end of a 2:00.2 mile in her very first outing. Landing the one-slot again is also a big plus for this daughter of Cassis.

Trotting Grace, the other violet elim victor, saw the luck of the draw go against her in the final. The Steve Searle trainee acquired the nine-hole in the fourth race 10-horse field. This daughter of Cassis did coast to a five-length triumph at the end of her 2:00.4 elimination mile.

The JD Finn stable has another major threat in the Violet with Charles Doehring home-bred Sunny Sasha (Jared Finn), second best to Maui Mama last week. The third place finisher Good Design did lack racing room in that race and the Brett Wilfong home-bred filly came up big in her debut by capturing the $12,000 Kadabra first series leg.

Casey Doubles Up: Casey Leonard found racing room in mid-stretch with the 1 to 2 favorite Fox Valley Gemini and the Terry Leonard trained two-year-old gelding showed his heels to the rest of the field in the $29,800 Cardinal Final for ICF freshman pacing colts and geldings.

Dandy Dune had a solid effort to take the runner-up spot in the 1:54.4 mile while Beach Shootingstar was third in the Saturday co-feature. 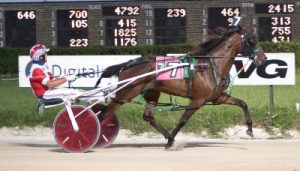 One race later in the $28,600 Violet championship for state-bred pacing fillies, Casey Leonard was back in the winner’s circle after guiding Hosea Williams Rollin Coal ($3.40) to another convincing victory, her third in as many starts, this time by four widening lengths.

Both the Cardinal champion Fox Valley Gemini and the Violet winner Rollin Coal are sired by Yankee Skyscaper.

Fox Valley Reggie ($5.60), driven by Tyler Shehan, turned out to be much the best in the first Cardinal elim with a dominating victory by almost four lengths with a career fastest 1:52.3 mile for trainer Freddie Patton Jr.

Uptown Sleaze was second, Sullivan took third, Fox Valley Jeter was fourth and the 4-5 favorite Sporty Redhot was moved up to fifth after the judges disqualified the original fifth place finisher Commondiscourtesy from fifth to seventh for interference in the stretch to also advance.

Last week’s Carey stake series champion Ima Skydancer ($16.60) was back in the winner’s circle with driver Tim Curtin after the second Cardinal elimination was over when the Mike Brink trainee held on for a slim nose decision over Mississippi Rabbit.

Slzburgerslzburger and Fox Valley Inferno, the third and fourth place horses also moved along to the final with Fox Valley Nemitz who went off stride in the early doing and did well to come on for the fifth place check.