With the second legs of Hawthorne’s Night of Champions 3-year-old stake series on tap this weekend, a number of ICF sophomore pacers and trotters will be asked to perform double duty this week.

Round two of the Plum Peachy for state-bred filly and mare pacers and the Beulah Dygert for second season trotters, will be contested on Saturday night, while their 3-year-old ICF male counterparts will race on Sunday in the Robert Carey stake series for pacers and Erwin Dygert for trotters.

Numerous ICF pacers and trotters who competed Tuesday evening in the 3-year-old Downstate Classic stakes on the Green County Fair programmed at Carrollton, will be back with either 3 or 4 days off when they go to the gate in the second $12,500 legs two of Hawthorne’s Night of Champions series added money events.

Just about all of Carrollton’s Downstate Classic 3-year-old champions will race again this weekend at Hawthorne. 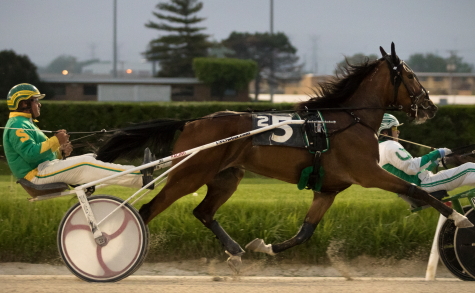 The first 3-year-old filly pace division saw a dead-heat for first, between Alan Bowen’s Skeeter Machine and the Ryan’s Mistress (Ronnie Gillespie), from the barn of Roshun Trigg.

Gillespie was the driving star on the Carrollton program. The Mississippi native finished with six winning drives and five were from the stable of fellow Mississippian horseman Roshun Trigg.

Besides the three Downstate Classic champions, they also teamed up to win with the 2-year-old filly trotter Lou Scion Lou and the 4-year-old mare Lous Credit Report in the IHHA’s aged mare trotting division. The horse and gelding division went to Trixie’s Jethro (Jared Finn), trained by Heather Stell.

Gillespie’s other winner at Carrollton, was the 2-year-old colt pacer Ryan Racketeer, trained by Ronnie. The Ryan N Hanover colt made his debut with a 2:03.1 mile, when he drew off by eight lengths. He’s in to go Sunday night at Hawthorne.