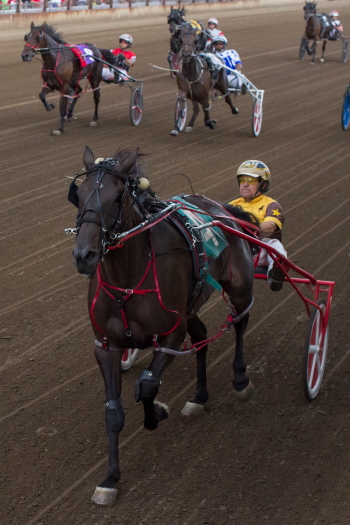 The fields have been drawn for the upcoming two-day Du Quoin State Fair harness racing meet. Five ICF championships will be decided on Tuesday’s opening day card with an 11 am first post and three more will be contested on the Wednesday program also beginning at 11 am. The Wednesday card had been originally scheduled for a 6:30 pm. start but was moved up because of a threat of rain.

Tuesday’s Illinois bred stake races, all with $25,000 purses, will go as the last five races on the card starting with the sixth race Director’s Award for 2-year-old pacing fillies.

The Shawnee for freshman filly trotters follows. From post one through ten you’ll find Skippmalou, Ours Is Victory, Ivanka, Puddin Cheeks, E L Game On, Lou’s Paramour, Heidi, Notanangel, Loussolatare and Louzotic from the furthest outside slot.

The Time Dancer for sophomore pacing fillies is next up. From the rail its Sandy Sage, Skeeter Machine, The Sister Master, The New Americana, Springfield victor Allbeastnobeauty, Party Belle, Isaac’s Ideal and Rollin Coal.

The Pronto Don stake for 3-year-old state-bred male trotters concludes the Tuesday program and it’ll have a full field of 10 horses going to the starting gate: Don’t Be Cheeky, True Detective, Fly The W, Cruzen Cassi, Majistic Caprice, Illinimight, who captured the Springfield final, along with Talk About Valor, Fox Valley Strpwr and Big Lou, in that order.

Wednesday’s three ICF championships are the final events on that card, and again all with $25,000 pots.. First comes the eighth race Darn Safe stake and 10 juvenile trotters will line up behind the starting gate.

Springfield winner Meyer On Fire (pp 4) takes on seven freshman pacing colt rivals in the Governor’s Cup with Holden Steady, Coming Ip and Frontier Muffler starting inside of him and Fox Valley Julius, Mr P M, Maximus and Cooter Luke on his right.

The ICF glamour division is the Dundley Hanover for 3-year-old pacing colts and geldings and the draw didn’t go well for the three likely favorites—Springfield conqueror You’remyheartrob, third place finisher Al’s Brief’s, and runner-up Backstreet Lawyer with posts 8, 9 and 10 respectively.

Stay-At-Home Freshmen: Some of the ICF 2-year-olds who won’t be making the trip to Du Quoin are racing Sunday night including The Bucket in race three. The Terry Leonard trained freshman was upset in the Springfield Final by Meyer on Fire, snapping a four-race winning streak. The Sagebrush freshman is 5-for-7 in his career with a win and a second in the Incredible Finale stake series.

Among the first season state-bred pacers also staying sharp on their home track in race nine are the fillies Fox Valley Lolo, Lilly Von Shtopp, Fox Valley Torrid and Yankee Joanie. The latter won an Incredible Tillie leg and was second in another for trainer Herman Wheeler.

Can “Bobette” Prevail Where Others Failed? Leonard wins six Sunday at Hawthorne
Scroll to top