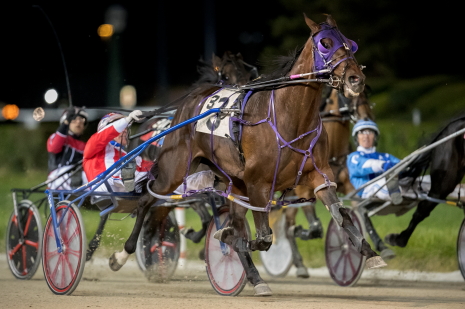 Fox Valley Torrid and her regular driver Casey Leonard, will leave from the three-slot in the $12,500 opening round of the Plum Peachy stake series for ICF sophomore pacing fillies. Valar Morghulis (Juan Franco), the bridesmaid in the 2018 Incredible Tillie final, also drew nicely, with the two post for trainer Nelson Willis. Both fillies have gate speed and it’s likely they’ll use it to gain early position.

However, traffic woes are always a possibility when you start behind your 10 foes, so the talented Jay Garrels trained filly needs some racing luck. Perch banked over $45,000 in her juvenile campaign.

Springfield and Du Quoin champ Fox Valley Halsey (Kyle Husted), got the worse of the draw for posts. She’s saddled with the 10-hole. Another Nelson Willis trainee, her $62,770 in first season earnings was second only to the $85,225 Fox Valley Torrid hauled in for owners and breeders Fox Valley Standardbreds of Sherman, Illinois. 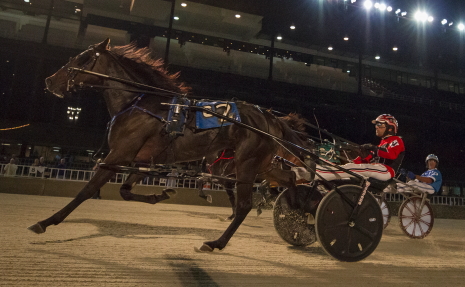 Fox Valley Torrid and Perch share the early favoritism with opening odds of 2-1 and 5-2, respectively. Fox Valley Halsey is at 4-1 first flash odds, followed by Valar Morghulis at 5-1. The other seven starters are strictly longshots, according to the Hawthorne program with odds ranging from 15-1 to 30-1.

Competitive Group: The $14,400 Bob Larry series final for 3 and 4-year-old male pacers will be decided tonight. The second race Late Closer showdown has a six-horse field with four of its starters listed at odds of 4-1 or lower.

Hart To Heart (pp 2, Ridge Warren), is at 2-1 and carries a three-race winning streak into the fray. The Mike Brink trained gelding is fresh off a 1:52.2 new lifetime mark.

The Terry Leonard stables Salvatore (pp 1, Casey Leonard), opens at 3-1, after making up eight lengths in the last half with a 26.2 last panel, when he finished third. The gelding paced a 25.2 sizzling last quarter a week earlier.

Heza Real Diamond (pp 3, Tyler Shan), the runner-up to Hart To Heart in the Larry’s first two series legs, is at 7-2, while first round victor Rock Steady Ron (pp, 4 Jamaica Patton), is at 4-1 after racing without cover a week ago.

Just Warming Up: Meyer On Fire ($5.40), started off his Hawthorne sophomore campaign the same way last season’s 2-year-old colt champion finished his first, with a victory. It came with a convincing three length romp in last night’s first leg of the Robert F. Carey stake series. The Erv Miller trained colt posted a 1:53.1 mile with Tim Curtin, his fourth driving victory on the card.

Dreams And Schemes ($2.80), had an easy time on the front-end in the Walter Paisley final, when the pre-race favorites Bankin’ On You and Lilly Von Stupp, both were scratched sick. The 1:55.3 Rick Schrock trained winner only had to beat two other horses in the undersized field.

Three races later Lourhianon (Tim Curtin), made it four in a row at the meet for trainer Kennedy Lindsey with a 1:59.1 mile in the Daryl Busse trot at a $2.60 mutuel.

Later in the evening the Terry Leonard stable’s Fox Valley Minka ($2.80), was under wraps at the end of the Dave Magee final, paced in 1:56.1 with driver Casey Leonard.