Springfield champion You’remyheartrob was bet down as the 4 to 5 favorite, but he turned out to be second best as 13-1 longshot Dandy Dude, capably driven by Ridge Warren, pulled off the major surprise with a career fastest 1:51.3 mile in the Dudley Hanover.

Owned and trained by Dane May of Newton, Illinois, Warren hustled out Dandy Dune($29.40), away from the four-post and into a quick lead before yielding to You’remyhearthrob at the first quarter, timed in 27.3 into a strong headwind. 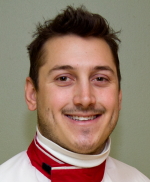 Ridge Warren steered Dandy Dune to his upset win in the Dudley Hanover.

Warren kept Dandy Dune in the pocket until after the half (55.1), and then came out with the Sagebrush gelding and raced You’remyheartrhob through the last turn and down the stretch before going on for his second straight win and his third in a dozen tries as a 3-year-old

Earlier the Steve Searle Stable’s Louscardamon captured the $25,000 Darn Safe stake for ICF 2-year-old trotting colts and geldings, but his connections driver Mike Oosting had some anxious moments waiting out a long inquiry by the stewards before the Lous Legacy freshman was the declared the official winner.

Louscardamon, who jettisoned himself out of contention at Springfield, when he went off stride in his elimination, made a break soon after the start of the Darn Safe stake. However, the freshman quickly went back trotting and was dropped into fifth without impeding any other horses.

Louscardamon ($8.80) raced outside of leader Prince Cassis on the backstretch and despite taking a lot of air powered his way to the front and held off a late-charging Lousraptor at the end of his winning 1:59.2 mile. The victory was Louscardamon fourth in six freshman starts for the late-blooming 2-year-old owned by his breeders Flacco Family Farms of Alexis, Illinois. 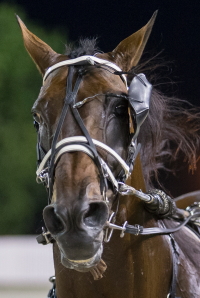 Mike Oosting was back in Victory Lane a race later, when the prohibitive 2 to 5 favorite Meyer On Fire, won for fun in the $25,000 Governor’s Cup for freshman pacing colts and geldings.

Oosting was content to drop the Erv Miller youngster into fifth at the start while Mr P M (Cliff Bell), was pacing a 28.3 first quarter. Oosting had Meyer On Fire ($2.60), on the move soon after, getting alongside Mr P M at the 58 half and then drawing away with the Sagebrush youngster in the lane to triumph in 1:54.3.

Meyer On Fire, also was a romping winner in the Springfield championships for ICF freshmen make pacers for the his owner and breeder Engel Stable of Buffalo Grove, Illinois.

Just as he did at Springfield Fox Valley Reggie, proved to be best in the $7,000 championship for ICF pacing colts and geldings ages four and up. Kyle Wilfong again guided the Jamaica Patton trained gelding to another victory, the 4-year-old pacer’s eighth of 2018 for owners Ron Phillips (Athens, Illinois) and Sharry Boledovich of Lakewood, Colorado.

Wilfong took Fox Valley Reggie ($6.40), out of the two-hole in the final turn, collared the pacesetting and eventual runner-up He Gone Jack (Casey Leonard), and won rather comfortably in 1:52 flat. Fox Valley Nemitz (Cliff Bell rallied to be third).

One race later Gary Patterson’s Cowgirl Too (Casey Leonard), came up with a gutsy winning performance in the $7,000 aged pacing mare championship.

Cowgirl Too ($11.40), raced without cover from the backside on outside of the leader Prettyfaceuglyways (Mike Oosting), but wasn’t going denied of her fifth victory as a 4-year-old, pulling away in the late to win in 1:55.2. Fox Valley Charliz (Jamaica Patton), nudged Prettyfaceuglyways for second.