For the second consecutive summer the Du Quoin State Fair races will be contested at Hawthorne Race Course.

Last year it was a steady diet of rain that eventually made it necessary for ICF stake events to be moved. This time around it’s a more somber issue, the Cover-19 epidemic that kayoed both State Fairs and necessitated the shift to Hawthorne.

Six state-bred championships are on the line tonight, sprinkled throughout a 16 race program and all are for either colts and geldings of both gaits. Four more ICF championships, strictly for the gals, will be decided on Saturday.

For most of the freshman going postward tonight this will be their fourth start of the month and in some cases, their fifth as they rapidly continue the march to Hawthorne’s Night of Champions on Saturday, September 19th.

One of those horses going to gate tonight for a fifth time in August is the red-hot home-bred Bobalou, trained by his driver Curt Grummel and owned and bred by Dr. Patrick Graham. Bobalou definitely will be the public’s choice when he puts his five race winning streak on the line that began at Springfield in late July.

Grummel has done a skillful job of developing the Lou’s Legacy freshman who was plagued with breaking problems early in his first season. Bobalou has put more than $27,000 on his card in August with $14,720 coming from last week’s State Fair championship. Tonight the youngster can pad his bank account with another good showing in tonight’s $29,500 Darn Safe trotting stake. 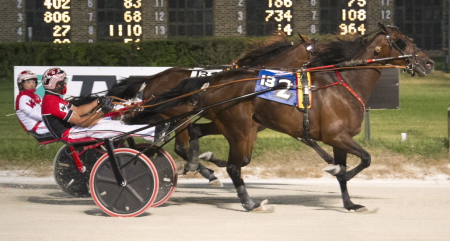 Former Illinois circuit driver Marcus Miller last week came in from Pennsylvania to give Well Basically (pp 5) a ground-saving inside journey and got the youngster out at the right time to gain a three-quarter length triumph in1:56.4. Tonight Atlee Bender gets the catch drive behind the 5-2 programmed morning line second choice. Frontier Charley (pp 1, Todd Warren) opens at 2-1.

Stepping Up: After playing second fiddle to his more renowned Mike Prink stable-mate Crooked Creek, a week ago On Higher Ground (Kyle Wilfong) got the best of his Mike Brink trained “roommate” and also the three-year-old colt trotting division leader Fox Valley Quest in the $30,000 State Fair championship.

Crooked Creek will leave from post three while his main rivals On Higher Ground and Fox Valley Quest landed the outside eight and nine slots, respectively.

Never Any Better: After a five-plus length romp last weekend in the three-year-old male pace final He’zzz A Wise Sky ($2.40, Bobby Smolin) will unquestionably be bet down to low-end odds once more in tonight’s $29,500 Dudley Hanover stake

No It Isn’t Social Distancing Can the “Lous” be Stopped?
Scroll to top