Homepage
You are here: Home1 / Mike Paradise2 / Early Birds Get the Dough

After a hotter than normal June weather wise, we begin July on Friday night with the weekend opening of Hawthorne’s summer meet. With a smaller than usual warm weather session, the ICF stakes schedule had to be jammed into a less than two and one-half month stretch.

A quartet of Illinois department of Agriculture stakes, the Violets, and Cardinals, get things under way on Thursday evening, the last day of June with $43,000 to $45,000 est. three-year-old events for both gaits. 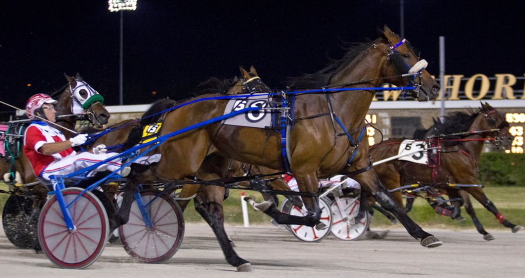 The same amount of ICF stakes money as in the past will be available but this time around there will be two championship nights, the first in July and the last, the Night of Champions, in its usual mid-September slot.

With the same purse structure for both the three-year-old and older pace and trot finals and eliminations, a horse can fare just in well money-wise in July as in September, so having you horse ready to roll starting with next week’s Violet and Cardinal elims is vital for horsemen.

With four legs heading into the Night of Championships not a possibility with the shorter meet, it’s back to the old days with eliminations deciding the championship fields in each stake showdown. That’s puts a lot of pressure on trainers to have their steeds in tip-top shape at the right time,

The July version of the Night of Champion stakes confrontations is right around the corner. Eliminations are set for July 15th and 16th, just a few weeks from now.

The first major test for this year’s two-year-old crop is on July 8th and 9th with eliminations for the Violet (fillies) and the Cardinal (colts and geldings) for both gaits. That’s only two weeks away.

The Night of Champions finals in September for two-year-old all are estimated at $100,000, that’s twice as much as the $50,000 on the line for each in the July Championships. Entry fees for each stake’s elimination is $200.

Entry fee for the older ICF stake events rise to $500.

Readers Speak Out: My recent article “Why Not More Springfield” emphasizing the needs for a second harness racing venue in our state sparked a lot of interest on the IHHA Facebook page with dozens of “likes.” Some readers took the time to comment on the story. Here are a few of those replies:

“Excellent idea, I hope the state takes a good hard look. They must help the horsemen!  “Michelle Luce

“A common sense partnership with Hawthorne and Reopening Balmoral with the current owners is what should happen, can be racing there year around in 23 it’s mind blowing that this isn’t being seriously considered.” Jayme Blonde

“We need a 2nd track, period. Hawthorne seems unwilling or unable to progress. Illinois is a huge state, let’s utilize other areas besides the Northeast corner. Open to all possibilities.” Troy Markert

“Something needs to be done ASAP. More racing at Springfield or open up Balmoral for year round racing!! Like we were promised years ago!!” Jackson Loy

“I like MR CAREY …but this is insane ! we NEED another track owned by ANYONE !” Ira Smolin

The John Filomeno superstar has competed in four Midwest states this year—Illinois, Ohio, Indiana and now Kentucky, going 8 for 15 in Opens while amassing over $102,000 on the way.

He’zzz A Wise Sky was was unbeaten during Hawthorne’s winter meet, going five for five in Opens. He also has Open victories in Ohio (twice) and Kentucky as a five-year-old and is closing in on a half-million dollars in lifetime earnings ($421, 611).