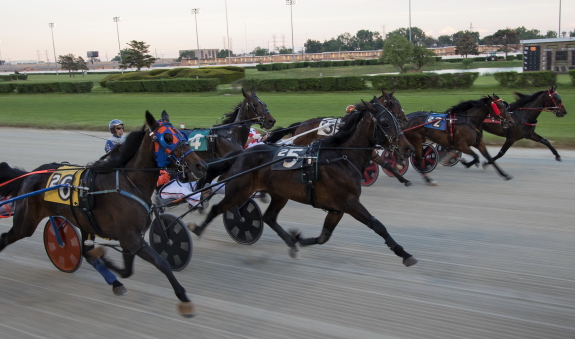 Unlike this recent start of a race at Hawthorne for older horses, this week it’ll be 2-year-old pacers and trotters sprinting out for position in the Cardinal and Violet stakes. (Four Footed Fotos)

It’ll be interesting to see just how many ICF 2-year-olds will participate in this week’s 2-year-old Cardinal and Violet stakes for both pacers and trotters.

Trainers were never asked to have their youngsters ready for these major state-bred stakes this early in the year. The primary reason for an earlier-than-normal allocation, is that the monies allocated by the Department of Agriculture for its Cardinal and Violet stakes must be distributed by the end of the state’s fiscal year that ends on June 30.

And we have four legs of Hawthorne’s Night of Champion freshmen stakes to be contested, before the gala evening on September 23rd and those have to be spread out during the summer’s 23 week schedule, so there was little choice, but to slot the Cardinal and Violet stakes this early.

The Illinois Department of Agriculture inaugurated the Cardinal and Violet stakes for both 2 and 3-year-olds and for each gait back in 1984 at Sportsman’s Park and they were raced in the fall. The freshman pacing events were raced either at Maywood or Balmoral beginning in 1997, again in the fall.

After the demise of harness racing at Sportsman’s Park, the 2-year-old Cardinal and Violet events became a fixture at Balmoral Park and were held on a regular basis the first or second week of October, a few weeks after Balmoral’s Super Night.

When Balmoral Park went under, along with its sister track Maywood Park in 2015 and Hawthorne took over as the lone Chicago circuit harness track, another change had to be made because Hawthorne for decades has raced thoroughbreds in the spring and after the closing of Arlington’s summer meeting, the runners returned to Hawthorne for a fall-winter meet through the end of the year.

Hawthorne hosted the 2016 Violet and Cardinal 2-year-old stakes in late September, the week after its Night of Champions evening. Last year they were moved up to the first week in July, a huge difference for trainers to have their best ICF juveniles ready to go for some lucrative five-figure purses. This year it was necessary for the Cardinal and Violet events to be raced almost three weeks earlier than in 2017.

Only one race for strictly 2-year-olds has been conducted at the current Hawthorne meet and that was for pacing fillies. There were not enough entries received to card an event for freshmen pacing colts and gelding.

Last Sunday, Springfield did host eight Illinois Department of Agriculture races for 2-year-olds with $4,375 purses on the line. Three were for pacers and five were for trotters.

The Springfield races were originally scheduled for last Saturday, but the weatherman didn’t co-operate and the card was shifted to Sunday morning.