The 2019 Springfield harness racing meeting got under way Friday afternoon and it didn’t take long for the first upset on the card and the failure of one of the pre-stake favorites to gain next week’s championship.

It came about in Friday’s second race, the first division of the Illinois State Fair Colt Stakes elimination for two-year-old pacing fillies when the 10-1 longshot Sign Her Up ($22.20), nicely handled by driver Juan Franco came roaring down the stretch for the fillies’ first pari-mutuel victory in 1:54.1.

However the heavy 1 to 2 favorite, Fox Valley Exploit (Kyle Husted), an Incredible Tillie stake series winner in her last outing, made an early break and never was a factor.

Double Parked ($3.60, Travis Seekman) made it six wins in seven lifetime starts for trainer and owner Leroy Hunt of Jackson, Tennessee in the second freshman gals pace with a career best 1:55 clocking.

With Fox Valley Extacy a late scratch in the second division, all ten juvenile pacing filly starters made next Thursday’s $32,500 championship. 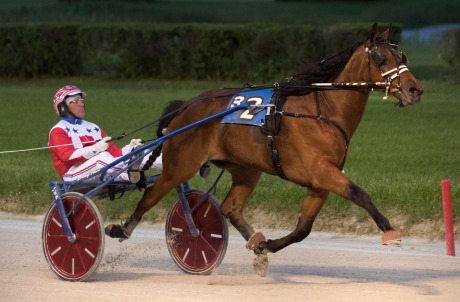 Fox Valley Quest (Casey Leonard), with six wins in seven career starts, will be the trotter to beat in next week’s ISFCS two-year-old final for male trotters. (Four Footed Fotos)

Driver Ridge Warren gave the Mike Brink stable’s On Higher Ground ($4.40) a two-hole trip and the Cassis gelding poured it on the lane to take the first division elimination for ICF freshman male trotters in 1:58.4, his initial pari-mutuel win for Illinois owners Bill Wright (Morton) and Brink (Springfield)

In the second colt and gelding trotting split the 2-5 prohibitive public’s choice Fox Valley Quest ($2.80, Casey Leonard) worn down Desert Sheik in the late going to prove best for the sixth time in seven starts. The 1:57.4 mile was a new mark for the Tom Simmons trained winner owned by Illinoisans Carl Lacey (Athens) and Benita Simmons (Springfield).

Also advancing to that freshmen final were Fitchey For Fun, Fox Valley Briton, U S Patriot and Lousinit from the first division and Desert Sheik, Twin Cedars Rocket, Deememorymaker and Fox Valley Kobe from the second elimination.

The front-stepping Canadian Mountie ($6.60, Casey Leonard), from the barn of Terry Leonard held off a furious stretch charge from Chick Magnet (Kyle Husted) and captured the first two-year-old male pace elimination. Only a nose separated the pair in the 1:58.2 mile. 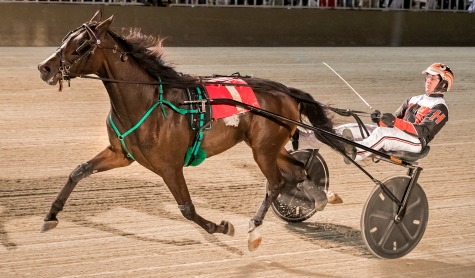 Louzotic (Kyle Husted), was one of three winning from the Steve Searle stable Friday afternoon at the Illinois State Fair meeting at Springfield. (Four Footed Fotos)

The last two races on Friday afternoon were three-year-old trotting preps. The fillies went first and the 2-5 choice Louzotic didn’t disappoint her backers, putting away a couple of challenges before pulling away to a 1:56.1 victory to give trainer Steve Searle his third winner of the afternoon.

Louzotic is owned by Flacco Family Farms and so was the colt and gelding sophomore trot winner Lousraptor ($13.80, Casey Leonard), trained by Roshun Trigg. The second, third and fourth place horses—Prince Cassis, For Trots Sakes and Super Betcha—all are from Mike Brink stable.

Casey had four winning drives on the afternoon.

Next Up: Day two of the Springfield meet gets under way at 12 noon Saturday.

The vast majority of elimination races to determine to next Thursday’s Illinois State Fair Colt Stake Championships fields were decided Friday afternoon, however there’s one 3-year-old pace elimination still to go on Saturday.

Four $7,000 ISFCS champions for older horses are also on the line Saturday. Two are on the pace and a pair on the trot.