The first week of Hawthorne’s 2017 harness racing meeting is in the history books and if the second one goes the same way for trainer Jim Eaton maybe the veteran horseman will do a handstand on the racetrack.

Eaton, a 2011 Illinois Harness Hall of Fame inductee, sent out nine horses last week and they all earned a check. Three of his horses finished first and another trio took home second place money. Together his nine starters amassed $22,180 in purse earnings in week one of the meet. 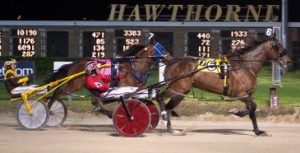 Through the years Eaton’s barn has had a steady flow of nice horses and they are always well classified. Many have been good enough to race out east the past few years where the money is better but so is the competition.

Currently Eaton has horses racing at Hoosier Park and Hawthorne and while it’s only the middle of May his decision to race many of his good horses on the Chicago circuit looks to be a rewarding move for Eaton and his primary owner Robert Silberberg of Michigan.

“We spent a lot of money racing horses over the past 34 years in Illinois,” said Eaton a long-time resident of Crete, Illinois and a native of Holland, Michigan. “With the situation the way it is in Illinois we had to race mostly out-of-state the last few years. I didn’t think there was any place as tough as Pocono to race horses but that Hoosier Park is right up there with them. It is very tough racing in Indiana, too.

“I wouldn’t be shocked to see a lot of trainers racing in Indiana come in and race this summer at Hawthorne. There are quite a few people there who aren’t making any money. It’s that tough there so they might give Chicago a try. They go for more money in Indiana but in some of the condition races not a lot more.

“I recall my owner Bob Silberberg a few months ago looking at the Hawthorne condition book and saying “with the purse structure at Hawthorne they would be a good option if things don’t work out well for us at Hoosier.’ It’s just one week but it looks like Bob was right.”

Silberberg’s Account Hanover took advantage of a two-hole trip given to him by driver Kyle Wilfong and overtook the 3 to5 favorite Evergreen Elite in last Friday’s Open Pace to ended up with the outside eight-slot in tonight’s $15,000 headliner.

Last week race was Account Hanover’s first appearance in Chicago since 2011 when he won a mid-size conditioned pace at Balmoral Park. The now 6-year-old gelding is 20 for 100 in lifetime starts with almost $210,000 in career earnings. He spent most of April and March in Open Paces at Ohio’s Miami Valley Raceway.

“Account Hanover got a great trip last week and he kind of likes that,” continued Eaton. “As you saw he can leave pretty good. He’s a real lazy horse and not all the drivers can get along with him but Kyle (Wilfong) gets along with him real well.” 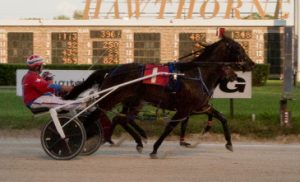 It’s Party Time: Lady’s Party established herself as the filly to beat in the Dave Magee Series with another convincing victory last night, this one a 1:55.3 career best mile with driver Casey Leonard.

The betting public hammered the Mike Titus trained 3-year-old down to 1 to 9 odds and Lady’s Party responded by drawing off by 4 and 1/2 lengths over Rousey Ronda (Ridge Warren) , a first leg winner for Charleston, IL owners Mitch Titus and Dennis Wright. Lady’s Party ($2.20) won her first series leg by 3 and 1/2 widening lengths.

Gary Rath’s C Far ($4.40) got her head in front at the finish of the first Dave Magee division, nudging Smiles Ahead (Kyle Wilfong) with a 1:56.1 mile. The Sportsmaster filly is owned and trained by Rath who also drove the filly to her first pari-mutuel win.

The outside 10-hole in an 11-horse field couldn’t keep Phyllis Jean ($4.40) from racking up her second straight Walter Paisley Series victory with driver Casey Leonard. The 4-year-old ICF mare trained by Leon Walker swept past her rivals and pulled away to a 1:55.3 mile for Berwyn, Illinois owner Al Beals