This season’s crop of state-bred 2-year-old pacing fillies will begin their march towards the Night of Champions with the first $12,500 legs of the Incredible Tillie series. Those two stake events will go as the fourth and sixth races.

The older ICF pacers, and in some cases not that much older, will compete in a pair of $15,000 Opens restricted to only Illinois breds. “The boys” will tangle in Saturday’s opener while “the gals” are in the middle (race five) of the 10 race program.

The Saturday race card also got spruced-up with an Open II for fillies and mares (race eight) with the expected favorites Kyles Secret (Travis Seekman) Pretty Image (Tim Curtin) and Velocity Layla (Kyle Husted) landing the three outside posts (6, 7 and 8), in that order. 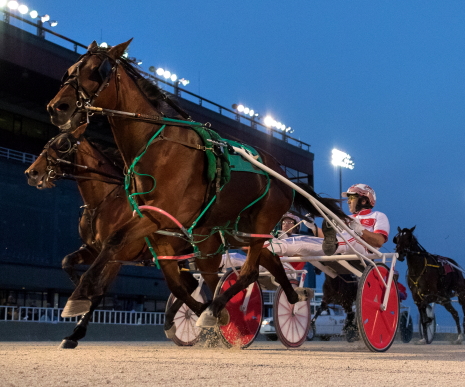 The first Incredible Tillie event is headed up by the Herman Wheeler Stable’s Yankee Joanie (Ryan Anderson) who is 2-for-2 to start her racing career. Two weeks ago the Yankee Skyscraper filly captured her $29,925 Violet in impressive fashion with a 1:57 flat clocking from the outside post in a six-horse field. Tonight she gets away from the advantageous pole position.

The Tom Graham Jr’s Winter Gram has won her last two races, including a division of the Violet, in up-close fashion and will likely go out and be there again.

Foolishlittlegirl paced a 27.1 last quarter when she was second best in her Violet division. The youngster will race out of the Jim Eaton stable for the first time tonight. Fox Valley Halsey, from the barn of Nelson Willis, has been sent off at even-money and at 4-5 when she finished second in her Violet and third a week ago with a less-than-desirable trip. 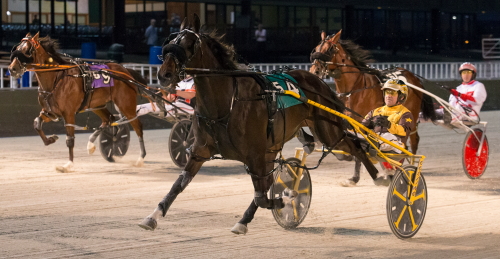 Backstreet Lawyer, a Tom Simmons’ trained stablemate of Fox Valley Nemitz, motored to 1:50.4 mile in the first of his two Carey series victories and leaves the 3-year-old ranks for the first time.

Stepping Up: Meyer On Fire (Kyle Husted) and Frontier Muffler (Freddie Patton Jr) took a major step towards the $100,000 Incredible Finale Final on the Night of Champions with victories in last night’s first legs of the stake series for ICF pacing colts and geldings.

Both division winners were sired by Sagebrush. 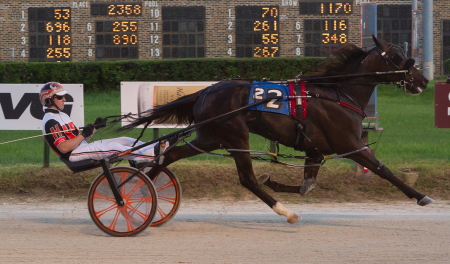 In the first Incredible Finale division, the 6-5 co-favorite Meyer On Fire ($4.40) made a move on the backside to get command, gave it up to Viola, and then came back in mid-stretch to retake the lead and pull away to a three and one-half length victory in 1:57.3.

Viola (Ryan Anderson) held on for second while the other co-favorite The Bucket (Casey Leonard) had a wide mile and was a non-threatening third.

Driver-trainer Freddie Patton Jr., made what turned out to be the winning move with Frontier Muffler ($6.60) soon after the first quarter, clearing to front and going on to take the second Incredible Finale field to the half in a modest time of 1:01.2.

When the stretch drive came Frontier Muffler had enough left to hold off Ryan Racketeer by a half-length while Cooter Luke (Tim Curtin) who lacked racing room in the lane, was right there to be third in the 1:59.3 mile.

The 7-5 favorite Maximus made a break on the backstretch and eliminated himself.