Homepage
You are here: Home1 / Mike Paradise2 / Feature Favorites All Have Something in Common

Skyway Fireball (No. 1, Tyler Shehan) pulled off at upset in the $13,600 Bob Larry Final over the 6-5 favorite You’remyhearthrob (No. 3, Kyle Wilfong). (Four Footed Fotos)

Sunday’s Hawthorne headliners, a pair of Late Closer Series Finals and an Open III trot, each has one significant detail in common: All three of those morning line favorites will be driven by the meet’s leading driver Casey Leonard.

The 40-year-old Harvard native has captured the last four Hawthorne driver titles and the way he has started off this summer’s meet another No. 1 finish looks to be in the cards.

Casey comes into Sunday’s program winning at over a 30 per cent clip and I don’t see that blistering pace diminishing any after the completion of tonight’s 11 race program.

Leonard will again guide the Rick Schrock Stable’s Star Of Our Show in the $11,000 Tony Salvaro series showdown. The 3-year-old filly has won her first two legs rather easily and last week’s 1:55.4 mile was a new lifetime mark for the Indiana bred filly. She’s listed at 6-5 odds in the program. 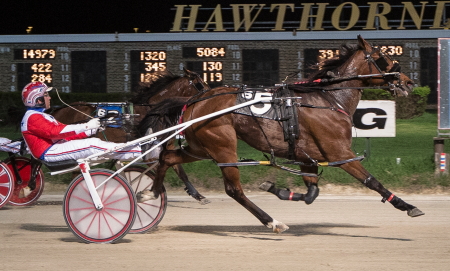 Casey Leonard teams-up again with Star Of Our Show when the Rick Schrock trained filly goes for a sweep of the Tony Salvaro series Sunday night. (Four Footed Fotos)

Her strongest rivals tonight appear to be My Kind Of Terror (pp 1, Mike Oosting) with two third place finishes in the series, Deo’s Perfectsound, a fast closing second a week ago, and ICY IYQ (pp 7, Issac Love) who made a break before he came back with a 27.2 last quarter.

Casey will be in the bike for the first time behind Dale Knox’s Pop Speed in the sixth race $11,200 Phil Georgeff, the even-money morning line choice.

Pop Speed was an comfortable winner at 4-5 odds in the Georgeff first leg but got nailed in the final strides as the overwhelming 1 to 9 choice last week by the fast closing Fort El Said (Tyler Sheehan).

To say that race didn’t unfold as most horseplayers thought it would is unquestionably an understatement.

First the 60-1 longshot Forsumoddreason blasted out for the early lead (:27.4) and then Party Jet’s at 48-1 took out of second to get to the front, a good idea since Forsumoddreason did indeed eventually go into retreat and was beaten 24 lengths.

Driver Tim Curtin certainly didn’t want to race his prohibitive favorite in third behind two longshots pacing fast fractions so he took Pop Speed out and rolled for the top but to get there the Dale Knox trainee had to get to the half in a quick time of 55 flat while pacing a sub 27 second quarter.

That second quarter had to sting Pop Speed and even though the pacer was still ahead by two lengths with a quarter of a mile to go he was noticeably shorting his stride while the late charging Fort El Said was lengthening his, going on to win in 1:54 flat.

Take Your Pick: The fifth race Open III Trot was drawn by groups with last Sunday’s Open III victors vying for posts 6 and 7 with Picky Picky Valor receiving the six and the lone mare in the race Annas Lucky Star landing the seven.

Picky Picky Valor is in top-notch form, winning in easy fashion in both summer meet outings, the last in a 1:54.1 career best time. Casey took over the driving chores this summer behind “Picky” for the 4-yar-old ICF gelding ‘strainer Gerald Hansen.

Annas Lucky Star (Kyle Wilfong) dominated the ICF filly trotting ranks as a 2 and 3-year-old and won the division honors both years for her owner and breeder Danny Graham of Salem, Illinois.

Annas Lucky Star left the filly and mare ranks in last week’s 4-year-old debut and trainer Nelson Willis certainly had her ready as she sped to a 1:55.2 front-end clocking. She’s only about $6,000 short of the $200,000 plateau in purse earnings and has a remarkable career record of 16 wins in 23 career starts. 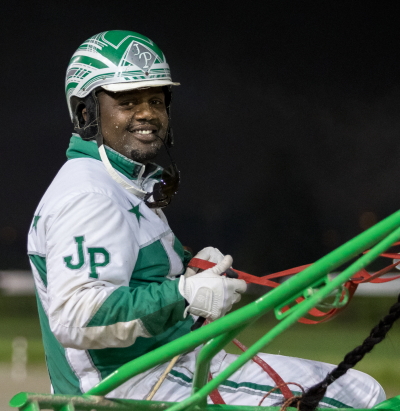 The Surprises Keep On Coming: Skyway Fireball provided the biggest shocker on Saturday’s card when he popped at 37-1 odds in the $13,800 Bob Larry Series Final thanks to a heady drive from Tyler Shehan.

The Dave Brooks trained pacer got away quickly from the pole position and settled in third behind the 18-1 pace-setting longshot Jaded Truth and the 6-5 favorite You’remyhearthrob through a quick 55 first half.

Skyway Fireball, owned by David and Adam Brooks of Cambridge, Illinois, then proved best in the lane with a career fastest 1:52 flat mile and rewarded his supporters with a $76.00 payoff. You’remyhearthrong was second, beaten three-quarters of a length. Beach Shootingstar rallied for third.

Sports Analyst blasted out from the 9-slot at the start and grabbed the two-hole behind the 50-1 longshot U Makin Me Wait who cut the fractions. Patton bided his time with his Sportsmaster gelding before tipping his pacer out in the last turn and powering past for a one and one-quarter length victory.