By Mike Paradise
Hawthorne’s entry box was jammed with the names of 36 of ICF freshman filly pacers for the Incredible Tillie stakes series again necessitating four divisions to be on the 12-race card.
A pair of elimination divisions were also needed for next week’s Violet Pace Final when 15 state-bred 3-year-old fillies were entering, bringing the total to 6 races on the program ICF filly stake events of the kind or another.
The four $12,500 Incredible Tillie stakes will go as races 2, 3, 4 and 6 while the Violet elims are back-to-back events with races 7 and 8 with the latter headed up by last year’s division champ Char N Mar, well on her way to taking this year’s honors as well.
Char N Mar has nailed own victories in 4 of her last 6 outings and that includes both of her Plum Peachy Stake Series divisions and a career fastest 1:52.3 mile in a June 10 Open Pace against older horses for Quaid Racing of Chicago.
The first five finishers in their respective Violet eliminations will advance to next week’s championship with its estimated $23,000 purse.

Incredible Tillie first leg winner Jump Right Up (Todd Warren), shown in a Four Footed Photo, will be a low-end favorite in the initial division of tonight’s second leg of the “Tillie”. The Ideal Towne filly brings a two-race winning streak into the race and landed the one-slot for owners, Quaid Racing and trainer Nelson Willis’ wife Cynthia Kay.
The Roshun Trigg trained Filly Forty (Jamaica Patton) and Willis’ Sheadelaer (Casey Leonard) are expected to vie for the favoritism in the second “Tillie” nine-horse division.
The most wide open division is the fourth race third where My Mona Me (pp 1, Travis Seekman), Fox Valley Charliz (pp 5, Dale Hiteman), first starter Rousey Ronda (Todd Warren) and Giftfromtheheart (pp 8, Jamaica Patton) all could get a good portion of the wagering.
The strongest of the four Incredible Tillie divisions appears to be the fourth (Race six) where you have first leg winner Princess Sage, trained and driven by Freddie Patton Jr. taking on Fox Valley Dandy (Dale Hiteman), another first round winner, along with Dandy’s Dududidudu (Todd Warren) a pair of fillies who came up with big efforts in their respective openings legs of the stake.
“Fox Valley Dandy kind of surprised us when the way he raced in the first leg of the stake,” said his trainer Ray Hanna. “We didn’t know he would race as well as he did in his very first start.”
Surprise, Surprise: It didn’t take long Thursday night for a shocker in one of the four ICF 2-year-old stakes. It came in the first division of the $10,000 Kadabra, the third race on the card.
Trixie’s Jethro was hammered down to 1 to 9 odds and after going five wide in the first turn to get command from the 8-slot he looked to be in good shape, hitting the half in 1:00.2 and getting away with a soft 31.2 third quarter, 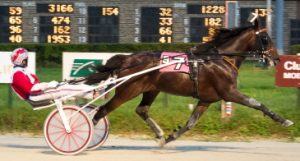 However Casey Leonard behind the Nick Giberson trained first-time starter Totally Pazzazzed (pictured in Four Foot Photo) had other plans. Casey had the winner in eighth in the early going at 25-1 odds and the colt looked to be too far back.
Nevertheless in the lane when Casey asked him for another gear Totally Pazzazzed ($54.80) obliged, powering past Trixie’s Jethro AT the 16th pole and drawing away by almost three lengths in 2:01.1 for his owners and breeders James and Tracy Walker of Sherman, IL.
Trixie’s Jethro, a Kadabra first leg winner settled for second while Marching Zion took third place honors.
Chalk players had their way in the second Kadabra division when the 2-5 heavy favorite Matt Q (Casey Leonard) made his third consecutive victory an easy 4 and 1/2 length decision in 2:02.3. Cassisandfifth was second.
The first $10,000 Fox Valley Flan saw Lyle Scurlock’s She’s Savvy ($5.40, Matt Krueger) lead from start to finish for her initial pair-mutuel win. It came with a 2:01.1 clocking, a half-length better than Lucy Quaider. Fox Valley Elana was third.
The second “Flan” saw another 25-1 longshot pull off an upset as Todd Warren steered Dandy’s ESP ($55.20) to her initial triumph in 2L00.4. The Bob Rittof trained gelding came from out of it and stormed down the stretch to win by six widening lengths.
Runner-up honors went to Betsey B Breeze and Sis’s Ellie Mae was third best.

Trigg Sends Out His “Lou-Lou’s” in Freshman Stakes My Horses Vet’s Bill Is How Much?
Scroll to top