The ballots went out this week to every member in our state for his or her choice as the 2017 Illinois Harness Horse of the Year. While the official announcement won’t take place until December 20 the unbeaten 2-year-old Fox Valley Gemini looks to be a shoo-in for the top honor.

You can’t argue with perfection and that’s what the Jim Ballinger owned freshman pacer Fox Valley Gemini was in his first racing season for the Terry Leonard Stable and driver Casey Leonard.

The Yankee Skyscraper gelding, out of the Cole Muffler broodmare Epona, went nine-for-nine as a 2-year-old and in most major stakes the outcome wasn’t even close.

Fox Valley Gemini average winning margin in an ICF stake final or elimination was by almost three lengths and that includes his 3 and 1/2 victory in the $195,000 Incredible Finale Final on Hawthorne’s Night of Champions. 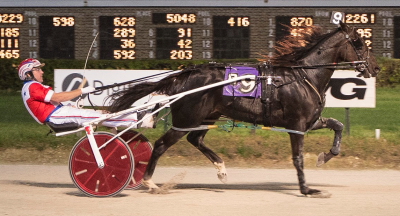 Even though Fox Valley Gemini dominated the ICF 3-year-old male division, the pacer didn’t “wow” the Leonard’s when he first arrived at their farm.

“Gemini” didn’t show a whole lot when we got him,” said Trainer Terry Leonard. “The Ballinger boys got him ready and sent him up to us to finish him off about a month or six weeks before he was ready to start.

“We didn’t think he was anything special until around the first of July. His confidence kept growing and he just blossomed.”

On Hawthorne’s Night of Champions Fox Valley Gemini came from sixth, almost a lengths behind at the three-quarter pole, and powered past his rivals with a sizzling 26 flat last panel in his 1:53.4 mile

You might think that 26 last quarter was the fastest for the Terry Leonard trainer pacer as a freshman but you it wasn’t. On July 22 Fox Valley Gemini had a scorching 25.3 last panel in his Incredible Finale Second Leg triumph.

“He just exploded that night coming off the last turn,” said Terry.

Besides sweeping Hawthorne’s Incredible Finale Stake Series, Fox Valley Gemini, breezed in his Cardinal elimination and the final and did the same at Springfield where he took his mark of 1:52.2. The only major ICF stake the freshman didn’t win was the Du Quoin. He didn’t make the trip to the southern Illinois State Fair.

“We talked to the Ballinger’s about Du Quoin,” continued Terry. “Gemini had some health issues. He was racing well but he wasn’t really in tip-top shape so why take a risk with the horse? It’s a long trip to Du Quoin (about six hours) from here (Harvard, IL near the Wisconsin border) and the horse had three straight weeks of stake races coming up right after Du Quoin.”

Instead Fox Valley Gemini got a well-earned four week rest after his Springfield conquests.

The decision to give the R&R to the freshman pacer proved to a wise one. The freshen-up Fox Valley Gemini went out and rattled off victories on consecutive September Saturdays in the third and fourth legs of the Incredible Finale before his romp in the Hawthorne championship.

Fox Valley Gemini hauled in $157,560 in his initial racing season for his Atwater, Illinois owner. He won’t get back in training until after Hawthorne’s winter meet is over.

“He’ll be made eligible to all the Illinois bred 3-year-old stakes,” said Terry. “We haven’t made a decision yet whether to stake him to some Hoosier Park stakes later in the year.”

The annual USTA District 5 (Illinois) meeting will be held on December 20th at the Poe’s Catering at 7162 Britten Road in Springfield, Illinois. 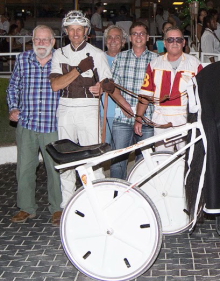 Tony Morgan made a triumphant return to Hawthorne on the Night of Champions. (Four Footed Photo).

Morgan Milestone: One-time Chicago circuit kingpin Tony Morgan is about to eclipse a monumental milestone in his illustrious driver career.

Coming into tonight (Dec. 15) the 59-year-old Morgan is only 9 victories away from 16,000 career dash winners. Only driver Dave Palone with 18,000-plus has recorded more than Morgan, a long-time former president of the IHHA.

Tony left Illinois for the greener purses of the Casino abetted east coast racetracks after the 2005 season after winning 700 races and tallying $5.1 million in purse earnings.

The Warwick, Maryland resident came back to Illinois for Hawthorne’s Night of Champions in late September and drove the Mike Brink Stable’s Illinimike to victory in the $115,000 Kadabra stake for ICF freshmen male trotters.