By Mike Paradise
Saturday’s opening leg of the Incredible Finale stake series for ICF freshman pacing colts and geldings proved to every bit as popular with horsemen and their owners as Friday’s Incredible Tillie stake was for fillies and mares.
Again four first leg divisions were needed to get 36 Incredible Finale eligible juvenile male paces raced in their first step towards Hawthorne’s Night of Champion final on Saturday, September 10.

The pre-race favorites in all four of Saturday’s four divisions will most likely go to youngsters who have already had a pari-mutuel start and in some cases a winning one at that.

The Shawn Nessa Stable’s Sork (pp 1, Todd Warren) will no doubt be a low-end betting favorite at post time of the second race after a rather dominating 1:56.4 victory two weeks ago when he was sent off as the 4-5 favorite.

One of the first starters to challenge Sork is Fox Valley Hoss (Travis Seekman) from the barn of trainer Mike Brown He’s a son of Sportsmaster out of the broodmare Tyler Too and he was sold as a yearling buy for $30,000 to James Behrendt of Connecticut.

Beaten favorite Ima Skydancer (pp 3 Ryan Anderson) and Patrick Q (pp 5, Juan Franco who both had solid efforts in their first pari-mutuel tests should get a lot of play in the third division.

An interesting first starter in that sixth race is Royale Big Guy, another Porcelli trainee own s by the Megan Rogers Stable of Chicago. Her 3-year-old brother is Royal Rose (1:51.2), winner of the/ Cardinal and a Balmoral Hanover. Another is Tiny Jim, the brother of fifth race favorite Dixie’s Boy. Both are Joel Smith trained pacers.
It should be pointed out that Casey Leonard chose to drive the Brett Ballinger first-time starter Fancy Creek over sixth race pacers Patrick Q, Sporty Redhot and Royale Big Guy.

The Nelson Willis Stable’s Fox Valley Inferno as only a neck short despite a wide mile in his debut and is the likely fourth division favorite. The Mike Brink Stable’s Sullivan was raced easy inside in his debut before unleashing a 27.2 final panel and finished second a week ago.

Tillie Tales: The 4-5 favorite Princess Sage ($3.60) wouldn’t be denied in Friday’s first division of the initial round of the Incredible Tillie stake series for ICF pacing fillies posting a narrow neck victory over the 12-1 longshot Sheadealer.

Clinton, Mississippi native Freddie Patton Jr. cut fractions of 29.2, 58.4 and 1:28.1 with Princess Sage when Sheadealer who was given a three-hole trip from Casey Leonard, got past the public’s choice in the lane. However, Princess Sage fought back and proved best at the end of a 1:56.4 mile for Patton, who also trains the Sagebrush filly. 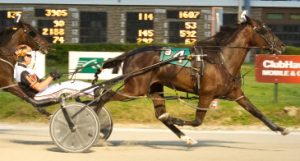 Razzleme Dazzleme ($11.60), nicely driven by Kyle Husted, wore down the overwhelming 1 to 5 favorite Filly Forte in deep stretch to pull off an upset in the second “Tillie” division.

(Four Footed Photos)
Husted settled Razzleme Dazzleme into fourth while Filly Forty took the field to a 1:00.4 half. Kyle tipped the Nick Prather trainee filly out as they neared the last turn and the Sagebrush filly grinded her way to be alongside the pacesetter at the three-quarters (1:30) before digging in when it counted in the 1:58.4 mile.

The Ray Hanna Stable’s Fox Valley Dandy was the surprise winner of the third “Tillie” division at 27-1 odds for driver Dale Hiteman. The victory came in the daughter of Sportsmaster’s very first outing.
Fox Valley Dandy raced next to last in ninth through most of the first half but when they turned for home Hiteman had her in striking position and the filly delivered the goods, surging past the 1-2 favorite Hope Hotspur in the late going to win in 1:58.1.

Chalk players got a reprieve in the fourth and final split when the heavy 1 to 5 favorite Jump Right Up ($2.60, Todd Warren) drew away to a two-length victory at the end of her 1::58 flat mile. It was the second straight victory for the Ideal Towne filly owned by Quaid Racing of Chicago and trainer Nelson Willis’ wife Cynthia Kay of Beecher, IL.